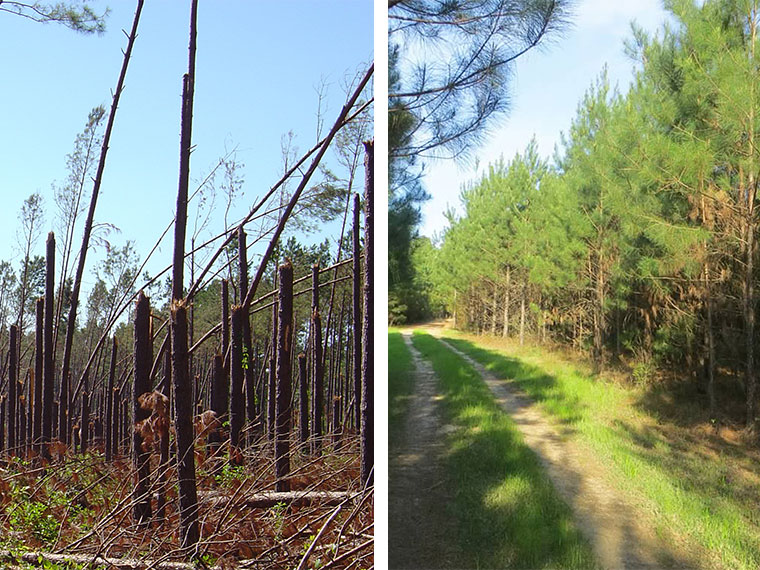 As bleak as the outlook seemed for Mississippi's forestry industry in the wake of Hurricane Katrina, the state's second largest agricultural commodity is slowly recovering.

"If you drive down the road today, you can still see timber stands that don't look like they should," said Stephen Dicke, a forestry professor with the Mississippi State University Extension Service in the College of Forest Resources. "There was a tremendous amount of damage and a lot of misery on the part of landowners and tree farmers. But today, we have a good volume of inventory, and we are continuing to grow trees."

In just a few hours, Hurricane Katrina leveled the equivalent of what timber growers would harvest throughout Mississippi in a year. The Mississippi Forestry Commission valued the state’s loss at $900 million. Eighty percent of that loss occurred in a 10-county area from Hattiesburg to the Gulf Coast.

The Mississippi Institute for Forest Inventory estimated that about 88 percent of timber in southeast Mississippi was damaged by the hurricane, with Hancock, Pearl River, Harrison, Jackson, Stone and George counties suffering the heaviest destruction.

Growers salvaged only about 35 percent of the damaged timber, Dicke said. Without such a large forestry industry and help from other states, growers could not have saved even that much.

"We had a large logging sector at the time and great infrastructure to handle the volume," he said. "The Department of Environmental Quality sped up the permitting process for wet- and dry-log storage facilities. Those permits usually take a year to get. The Department of Transportation also issued special harvesting permits for log trucks. I was proud of the way everyone worked together."

In the midst of supporting recovery efforts, Dicke and other Extension personnel immediately organized and taught a series of educational seminars. Timber producers needed information to begin making decisions about salvage and to better understand tax laws.

"Our initial effort was to make sure people had the information they needed to make decisions about salvaging timber and filing their taxes," said Glenn Hughes, an Extension professor of forestry in the College of Forest Resources.

Much of the salvaged timber could not be used for its intended purpose, Hughes said. For example, trees destined for plywood production are peeled in a milling process that resembles unrolling toilet paper. However, the high winds separated the trees' rings; instead of rolling off in thin sheets, the trees crumbled. As a result, much of the damaged timber could only be sold as low-value pulpwood worth a small fraction of its pre-Katrina price.

One landowner interested in ways to use the vast amount of damaged timber started Piney Woods Pellets in Wiggins. The mill converts low-value wood into pellets that can be burned to generate electricity, a product marketed primarily in Europe.

A larger firm later bought the mill, and it has tripled in size. It continues to process wood and has been a bright spot for the state's forestry industry, even through the recession that hit in 2008.

"The timber market largely depends on the construction industry and the housing market," said James Henderson, associate Extension professor of forest economics and management. "Before the recession, we were building about 2 million houses per year in the U.S., but in the trough of the recession, we were building just 500,000 houses per year. And we stayed at that level for about three years."

Currently, the nation builds more than 1 million houses per year, and that number is projected to reach 1.5 million by 2017, Henderson said.

"With this increase in housing, lumber markets have improved," he said, "but this is not reflected in the price received by landowners."

Although the state has more than recovered in timber volume, challenges still linger for landowners and the MSU scientists and specialists who help them.

"Katrina left a dangerous legacy in the woody debris that remains in our forests," Hughes said. "There is still a lot of fuel left on the ground, especially in the southern part of the state. But many of our landowners are increasingly interested in prescribed burning, which keeps the fuel level low.

"We also have seen a dramatic increase in invasive species after the hurricane," Hughes said. "Cogongrass is one of our greatest challenges. People have begun to realize the dangers posed by these plants and are interested in ways to manage them."

Landowners and tree farmers have realized other positive outcomes from the hurricane. Some landowners reviewed and modified their management practices.

"Many of those who replanted pine chose to replace loblolly pine with longleaf pine, which is more resistant to storm damage," Hughes said. "There was a lot of misery on the part of timber owners after Katrina. One good friend lost about $300,000, and another lost about $3 million. Businesses they’d spent all or much of their lives managing were devastated."

"There is no value I can place on the emotional impact that Katrina had," said Chambliss, a Forrest County resident and landowner. "It was devastating to see the trees lying on the ground that had been growing just the day before as a result of the hard work by my dad, granddad, myself and other family members."

Chambliss estimated the farm lost between 35 and 40 percent of its trees, which he valued at about $400,000. But 10 years later, he is still in business.

"The only alternative was to do nothing, and that was not a viable alternative," he said. "The only thing to do was to manage it back to where it had been."

To do that, he changed his management practices. He replanted with longleaf and slash pine, which are more resistant to high winds than loblolly pine. Chambliss said he is also considering shortening the rotation of some plantation pines by five to seven years to reduce the risk of damage to mature, marketable timber in the future. To combat the surge in invasive species—such as cogongrass, Chinese privet and Japanese climbing fern—he has increased use of herbicides and prescribed burning.

"It's stunning how fast it has regenerated," Chambliss said. "Some of it we left to natural regeneration, and some we replanted. If you look at it today, you say, 'It couldn't have had that much damage.' But it did. It's coming along nicely, and it looks like within the next 10 to 15 years, it should be back to where it was before Katrina."