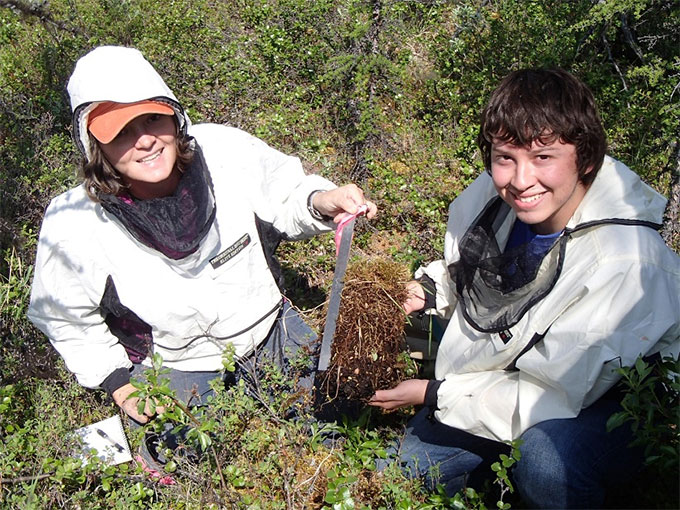 The forests of Siberia may be half a world away, but carbon released by wildfires raging there have the potential to alter Earth's atmosphere and lead to additional global climate change.

Exactly how much carbon is being released is the focus of a National Science Foundation-funded investigation by Mississippi State University assistant forestry professor Heather Alexander and graduate student Homero Pena. They are part of a scientific team in the land-grant institution's forestry department and Forest and Wildlife Research Center.

To determine carbon amounts lost during the fires—and hopefully gained back during the forest regrowth process—Alexander and Pena have been traveling since 2014 to the legendary Russian province that covers most of Northern Asia. Alexander came to MSU in 2015 from the University of Texas at Brownsville (currently known as the University of Texas Rio Grande Valley), where Pena also received a biology degree in 2015.

Their Siberian investigation continues this summer. Alexander said the project's ultimate goal "is to measure the amount of carbon released by burns of varying severity, as compared to the carbon sequestered when forest regrowth takes place."

She said this year's mission is "to continue gathering information about how stand density and other factors such as aspect, which is the direction a slope faces, and stream and river areas all impact carbon storage."

Because Siberian forests hold 20 percent of the planet's carbon stock, the potential for further damage to the world's climate is huge, Alexander said.

According to the University of Kentucky doctoral graduate, the Siberian situation is caused, in part, by global climate changes that already have taken place. Forest fires have become more frequent as warming and drying trends occur throughout northern forests of the vast geographical region, she explained.

Alexander said the fires usually begin when lightning bolts strike the moss covering much of the forest floor, which is highly flammable when dry. As trees, plants and ground litter are being consumed, the problem is exacerbating as the high heat also melts permafrost layers that store many subsurface carbon pockets.

"There's the initial release when organic material burns off, but that's often followed by subsiding, or sinking, of the permafrost soil layers and soil warming, which causes further release of carbon," Alexander said.

Severe fires do offer, however, the possibility of positive impacts because they "tend to cause the thickest regrowth" and "the more trees present, the more carbon absorbed."

Pena said the MSU sampling process measures "the basal diameter and height of plants growing in our study area and taking samples of the soil. We have equations we developed during previous field seasons that help us determine how much carbon is stored in a tree, shrub or even soils."

While Siberian days are long and the meticulous work both mentally and physically demanding, Pena said he has enjoyed being in a natural setting that is so completely different from the South Texas town of Lozano where he lived and the Mississippi State campus where he now pursues a master's degree in forestry.

"When you walk out there, it's like walking on a six-inch deep sponge because of the moss; and then there's the permafrost," Pena said. "After living in Texas and Mississippi, it's surreal to be able to peel away the organic layer on top of soil and find ice."

Despite its distance from the U.S., Alexander and Pena stressed how release of carbon stores in far-off Siberia really can have a worldwide impact.

"These are massive wildfires that can affect up to 500 million acres, 10 times larger than the state of Mississippi," Alexander said.

"The severe rainfall we've been experiencing (in the South) can be linked back to changes in the Arctic because the way the jet stream flows is determined by Arctic circulation patterns," she said. "Fires alter the climate at regional-to-global levels by emitting greenhouse gases into the atmosphere and by changing the heat absorption of the land's surface.

"As the climate gets warmer and drier in many regions, our ability to control and put out fires, and manipulate the kind of plants we want in the forest by using fire, is going to change," Alexander said.

For more on forestry and other academic majors in MSU's College of Forest Resources, visit www.cfr.msstate.edu; for the Forest and Wildlife Research Center, www.fwrc.msstate.edu.