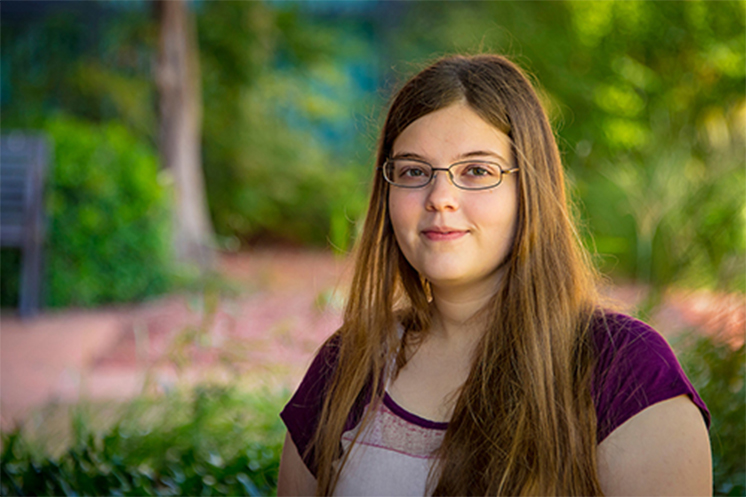 A senior forestry major in MSU's College of Forest Resources has received a competitive scholarship from an international nonprofit focused on advancing research and education in arboriculture and urban forestry.

Katrina Henn is one of three recipients of the $5,000 Robert Felix Memorial Scholarship, supporting college students studying arboriculture and urban forestry with the intention of entering the profession. The scholarship was awarded by the Tree Research and Education Endowment Fund, or TREE Fund, a charitable trust affiliated with the International Society of Arboriculture and the Tree Care Industry Association.

Henn is the daughter of Alan and Linda Henn of Starkville. She is pursuing an urban forestry concentration as well as minors in both geospatial and remote sensing, and computer science.

Henn said while she started out as an MSU computer science major, her love of the outdoors drew her to forestry.

"I like urban forestry because it's like a puzzle you have to figure out. All the trees in a city's limits, whether on public or private property, make up the tree canopy and an urban forester's job is to help manage the entire system—not just the trees, but also resource management, water flow, pollution, aesthetics and wildlife," Henn said.

Henn also has been the recipient of the J.S. Therrell Scholarship in MSU's College of Forest Resources, the Arboriculture/Urban Forestry Memorial Scholarship from the Professional Arborist Association of Mississippi, and a scholarship from the Deep South Garden Club. Henn spent time this past summer in the MSU Extension Undergraduate Apprenticeship program under the direction of Jason Gordon, associate extension forestry professor in the Forest and Wildlife Research Center.

Gordon said Henn's work during the apprenticeship demonstrates her professionalism and drive. For the apprenticeship, Henn interviewed more than 30 city officials and other stakeholders to learn how cities prepare for and respond to tree removal after a natural disaster. She presented her findings at the Mississippi Academy of Sciences and the MSU Undergraduate Research Symposium and is in the process of preparing a manuscript on the research.

"Not a lot of students would have put this level of work into an apprenticeship," Gordon said. "Katrina is an exceptional undergraduate who works on the level of a graduate student. She is committed, dedicated and independent, and she strives to do the best job possible."

"The International Society of Arboriculture has thousands of members across more than 30 countries and the Tree Care Industry Association is a national trade organization with more than 2,300 member firms. As the 501(c)(3) affiliated with these organizations, the TREE Fund attracts several hundred scholarship applicants each year," Gordon said. "We're proud of Katrina's hard work and her recognition as a recipient of this competitive award."

For more information on the Department of Forestry in MSU's College of Forest Resources, visit www.cfr.msstate.edu. Forestry