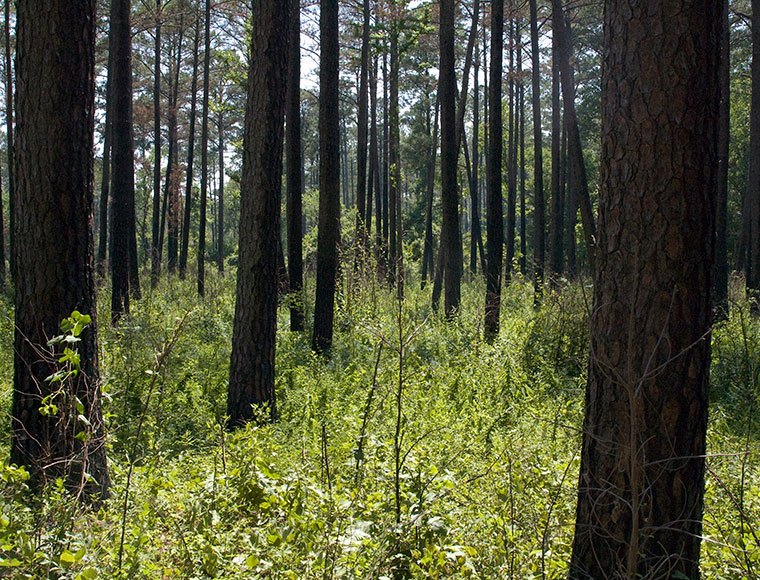 Conventional rotation or optimal harvest age in loblolly pine plantations is typically 30 to 33 years. Other species such as longleaf pine have much longer optimal rotation ages. However, the more a tree grows, the better the wood.

Forest economists in the Forest and Wildlife Research Center recently studied how much more income it would take for landowners to extend their fnal harvest by 10, 20, or 30 years.

"Southern pine are among the most intensively managed forests in the world," said Dr. Don Grebner, professor and head of the Department of Forestry. "Growing southern pine plantations on shorter rotations increases the proportion of juvenile wood in harvested saw logs when compared to growing older trees."

Wood quality increases with age, but there are risks and lost revenue, when extending the rotation from 30 years to 40, 50, or 60 years, Grebner added.

To determine the price premium landowners would require to extend the rotation, the economists simulated four southern pine stands for growth and yield using the Forest Vegetation Simulator southern variant.

"We simulated 48 management regimes from both even- and uneven-aged systems that included a combination of site indices and planting densities including maximum diameters in an uneven-aged pine system," Grebner said.

The economists found that landowners would be willing to delay harvest of even-aged loblolly pine for 10 years for a price premium of $5.06 per ton, 20 years for $17.77 per ton, and 30 years for $37.92 per ton. The premium would be on top of the current stumpage value of timber. Loblolly is the most grown species of the four main southern pine species and had the lowest price premium. Longleaf generated the highest premium in the simulations.

For uneven-aged pine, scientists looked at delaying rotation by five years. In these scenarios, price premiums ranged from $1.40 to $3.39 to extend harvest from five to 10 years. Slash pine garnered the highest premium, while longleaf rendered the smallest price increase.

Armed with information on landowner premiums, the economists wanted to know if sawmills were willing to pay a premium.

"To our knowledge, this is the frst time sawmills have been surveyed to determine if they are willing to pay a premium price for high quality pine sawtimber," Grebner said.

Scientists surveyed 517 sawmills in the Southeast, 26 percent of which completed the survey.

The sawmills specifed that they would be willing to pay a premium to purchase Grade 1 sawtimber, Grebner added.

The information is useful to landowners considering delaying harvest to grow sawtimber.

"Most forest landowners want to grow sawtimber for a multitude of competing interests, including revenue and wildlife habitat," Grebner said. "Delaying harvests could allow landowners to generate a premium price for their sawtimber while providing habitat for a suite of wildlife that need older grown timber to thrive."

The study was the topic of graduate research conducted by Arun Regmi. In addition to Grebner, Drs. Robert Grala, forestry professor, and John Willis, former assistant professor, worked on this project. This research was funded by the U.S. Forest Service and the MSU Forest and Wildlife Research Center.