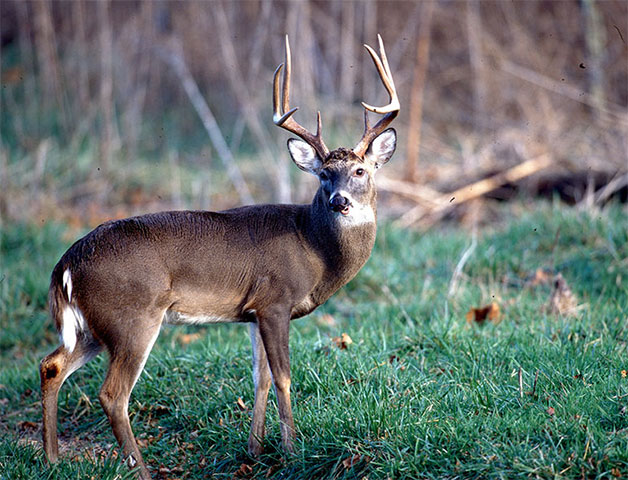 Whether it's nutrition, genetics, habitat or population health—or even disease—scientists in Mississippi State University's Deer Lab not only research best management practices, but also work to make informed recommendations to hunters.

CWD, or chronic wasting disease, was first detected in the state in February 2018. Mississippi now has two CWD management zones across 14 of Mississippi's 82 counties. In early fall of this year, the Mississippi Department of Wildlife, Fisheries and Parks, or MDWFP, also received an uptick in reports of sick or deceased deer caused by an outbreak of HD, or hemorrhagic disease, commonly called "blue-tongue." MSU deer biologists in the Forest and Wildlife Research Center are raising awareness of two current, but very different, diseases.

"Surviving deer will carry antibodies for the disease, which protect them and the overall population from future disease impacts," said Demarais, noting HD can be cyclical. "We note outbreaks roughly every three to six years, although there are likely a small number of deer dying from it on an annual basis in some areas of the state. The timing and extent depend on strains and weather conditions. When there is a large-scale outbreak the deer that survived will have antibodies, which offer immunity for several years from the same and similar strains."

In contrast, CWD is relatively slow acting, taking up to two years to cause mortality, and appears to be 100 percent fatal. A sick animal can spread the disease as soon as six months after exposure until it dies, Demarais explained.

He noted that death from CWD can be caused by the disease or an opportunistic infection.

"A deer with CWD will literally waste away because they stop eating and starve to death. However, many CWD deaths are indirect mortality, meaning the immediate cause is not CWD but the animal likely wouldn't have died if it wasn't for the disease. For example, CWD causes a loss of control over muscles and increased salivation. These two signs together predispose the animal to contracting pneumonia, a common indirect mortality caused by CWD," Demarais said.

He also said that hunters may be more inclined to notice HD as opposed to CWD.

"Hunters find and can understand HD disease mortality because they see it themselves—HD disease is centered on late summer/early fall and around watering holes. CWD mortality takes place year-round and is spread across a property, so hunters are much less likely to find carcasses. Lack of obvious visual evidence makes CWD less obvious to hunters, so they may have a harder time believing it is really an important consideration," he said.

Despite a reduced chance of seeing a deer impacted by CWD, Demarais cautions that it is a disease all Mississippi hunters need to take seriously.

"CWD has long-term impacts on a deer population health and size that can grow increasingly worse over several years," he said.

On that front, MSU researchers are searching for better ways to detect emerging outbreaks of CWD.

"We're sampling environments where CWD has been detected in places where deer frequent the landscape," Strickland explained. "Essentially, we hope to detect the infectious prions, or misshapen proteins, that cause CWD and develop some relationship of where they are more commonly found in the environment. Hopefully, that will lead to management recommendations."

The MSU Deer Lab also is doing its part to better educate hunters on the disease with a series of animated videos currently in production. Strickland encourages hunters to test their harvested deer for CWD.

"The Mississippi Department of Wildlife, Fisheries and Parks has done a great job of setting up CWD drop-off locations. Turning in your sample is completely free. It's a win-win, helping the hunter and the state," he said.

"Continue to enjoy hunting deer, while taking care to have your harvest tested for CWD. It's easy and takes about seven days to get results," Demarais said. "Testing ensures your family eats venison only from deer without evidence of CWD infection. While there are no known cases where a CWD infection has spread to humans, a similar disease in cattle known as mad cow disease did jump to humans. The state health agency suggests the prudent approach is to not eat venison from deer that test positive for CWD."

To find out where to test a harvested deer for CWD, visit www.mdwfp.com/wildlife-hunting/chronic-wasting-disease. For more information on the MSU Deer Lab, visit www.msudeer.msstate.edu. For more on the College of Forest Resources, visit www.cfr.msstate.edu. Visit the Forest and Wildlife Research Center at www.fwrc.msstate.edu.