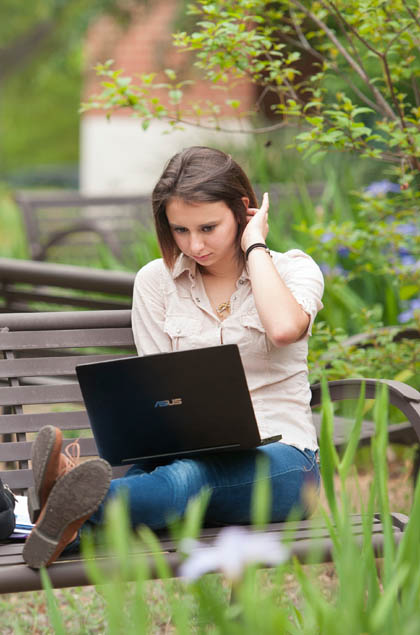 Adaptation to "dishonest" environmental signals: Insights from an experimental microcosm

Isabella Durham, a senior wildlife, fisheries and aquaculture major, examined fitness of individuals and populations to select quality habitat in light of changing climates. An animal's perception of these quality cues and their ability to adapt to changing cues are critical to population persistence. The influence of perception of resource quality on fitness of fruit flies (Drosophila melanogaster) was examined in an experimental system consisting of dishonest resource signals. Flies were placed on 24 diets varying in nutritional quality, and with non-nutritional quality-modifying additives, in a fully crossed design (high or low concentrations of carbohydrates, yeast, and sugar, and an attractant, repellent, or no additive [the control]). Eight generations were grown on every diet in isolation across 4 experimental trials, and fecundity counts were taken at generations 2 and 8 to assess potential adaptation. Fitness generally declined at low nutritional values as expected, though this effect diminished significantly by generation 8. In generation 2, diets with added attractant exhibited higher fecundity counts, and repellants exhibited lower counts; however, the direction of both effects switched by generation 8. Our results indicate rapid adaptation to adverse true environmental conditions, with populations increasing their fecundity by generation 8 on poor quality resources. Populations also adapted to the presence of a perceptual modifier over the same period-that is, incorrect signals of resource quality ceased to modify behavior within 8 generations of exposure. These results suggest that the rate of generational turnover is critical to population persistence in changing environments. Quickly reproducing ("r-selected") species should more quickly to adapt incorrect signals than those that reproduce slowly ("K-selected") due to decreased time necessary for adaptation to occur across generations. Animal perception and cognition are ecological mechanisms critical to population persistence in changing environments, and to establishment in novel environments (e.g., reintroduction or range expansion), with profound implications for biological invasions, conservation, and management.

Katherine Abell, a wildlife, fisheries, and aquaculture major, and Zachary Senneff, a forestry major, were among the winners of the 2014 MSU Undergraduate Research Symposium. Abell placed first in the community engagement and social sciences categories and Senneff placed second in the biological sciences and engineering category.