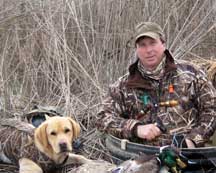 Waterfowl- and wetlands-related teaching, research and service are being greatly enhanced at Mississippi State through a significant gift from the chairman and chief executive officer of Cox Enterprises Inc.

James C. Kennedy recently established an endowed professorship in the university's College of Forest Resources to focus specifically on the two areas.

An endowed chair is a prestigious faculty position filled by a nationally prominent scholar and teacher. A minimum of $1.5 million is required to create an endowed MSU chair.

A native of Hawaii, Kennedy is a long-time conservationist and philanthropist. His love and respect for waterfowl is well-known, both internationally and in Mississippi. York Woods, his 5,500-acre conservation-easement property, is located near Charleston in Tallahatchie County.

When Kennedy is not in Atlanta, Ga., leading Cox Enterprises--one of the nation's major media companies and automotive service providers--he may be found on his North Delta property.

"I find great pleasure in restoring land and improving habitat for waterfowl and other wildlife," Kennedy said.

His passion for conservation also is demonstrated through service on the executive board of Ducks Unlimited Inc. and as a former president of Wetlands America Trust.

"The endowed chair at MSU is one way that I can give back and ensure that future generations will have waterfowl and wetlands, and people to study and steward these valuable natural resources," Kennedy explained.

Hopper said the Kennedy Chair also holds distinction as "the first endowed waterfowl and wetlands university chair among the 14 states of the Mississippi Flyway, which includes the Mississippi River and its tributaries."

The Magnolia State is recognized by wildlife researchers and hunters alike for its strategic location on the waterfowl migration path stretching between Canada and the northern United States and warmer winter climates found in the Southern states and beyond.

Taking advantage of this natural geographic circumstance, MSU researchers have, over the decades, worked hard to develop a nationally respected program in wildlife science and management.

"For that reason alone, it seems fitting for our college to house the chair," Hopper observed.

Throughout much of North America, university-based programs focusing on waterfowl and wetlands conservation are declining in number.

"This decline in programs was one of Mr. Kennedy's major reasons for establishing the chair," added Hopper, an alumnus of the MSU college.

NEWS EDITORS/DIRECTORS: For more information on the Kennedy Chair, contact Dean Hopper at 662-325-2953 or ghopper@cfr.msstate.edu.