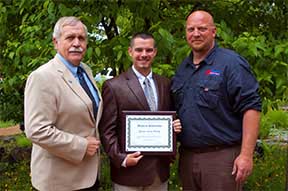 Spencer Beasley is a senior forestry major with a concentration in environmental conservation. A resident of Decatur, Alabama, Beasley chose MSU because of its small university feel and nationally recognized forestry program. Beasley heard about MSU during his junior year of high school through his neighbor who was a student at State. After attending a football game in Davis Wade Stadium, taking a tour of the University and meeting with someone in the College of Forest Resources, Beasley knew Mississippi State University was the place for him.

Beasley has thrived in the College of Forest Resources. As a junior, he served as secretary of the Forestry Club/SAF Chapter and then as vice president. He attended the Society of American Foresters (SAF) National Convention in Charleston, South Carolina and competed in the Southern Forestry Conclave in Blacksburg, Virginia. In addition to serving as an officer of the Forestry Club/SAF Chapter, he also serves as vice president of the Dean's Council and is a CFR Ambassador. Beasley grew up as an Alabama Crimson Tide fan and has proudly converted to a Bulldog. He credits his conversion as a result of enrolling in a nationally recognized forestry program, bonding with classmates during the summer field program and during late night study sessions.