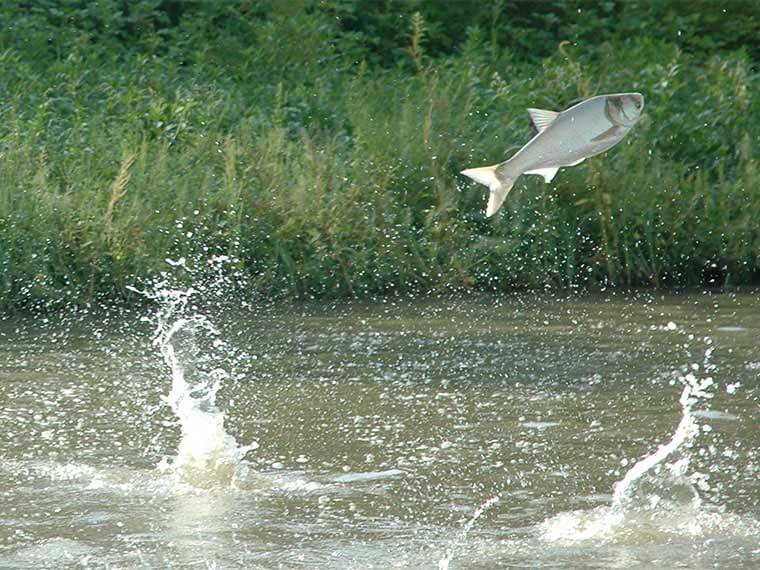 Many Mississippians are aware of the damage wild hogs do to the land in the region, but they may not know the Mississippi River and surrounding waters are facing a serious threat from another invasive species—the Asian carp.

"The public must truly understand the concept of invasive species," Leopold said. "We must shift public perception from seeing a novel, exotic animal to seeing invasive species for what they are: dangerous pests that can potentially cause tremendous damage to our ecosystems."

Leopold recommended that government officials at the state and local levels increase their understanding of the problem and help slow the spread of the species.

"Now is a critical time to act, as Asian carp populations are expanding in the Mississippi River Basin," Leopold said. "Legislators need to know about the situation so they can implement policy and legislation to help solve the problem. Mayors, aldermen and other municipal leaders need to be aware so they can take action at the local level and keep Asian carp out of the streams, ponds and other bodies of water in their communities."

"Asian carp are ferocious planktivores, aggressively feeding on zooplankton and phytoplankton," Smith said. "These tiny crustaceans serve as the foundation for all aquatic ecosystems. All fish species depend on these plankton in the early life stages of development. Diminishing these resources could impact all native fish populations."

"If the native populations or the quality of these populations begin to dwindle, there could potentially be less sport fishing and less opportunity for the revenue that comes with it, due to a lower quality fishing experience and higher safety risk associated with outdoor water recreation," Smith said.

Silver carp pose a significant threat to the safety of anglers and recreational boaters. Noise from outboard motors stimulates schools of silver carp, causing them to jump up to 10 feet out of the water. When this happens, boaters can find themselves traveling at high speed through a swarm of flying silver carp, Smith said.

The speed considered the safe zone is above 30 miles per hour. After reaching this speed, boaters may encounter fewer silver carp.

"According to reports from the Environmental Protection Agency, injuries have included cuts, broken bones, concussions, black eyes and back injuries," Smith said.

In a CRHWC project, Smith conducted a literature review on Asian carp in response to the ecological, economic and health and safety threats posed by the species.

"I created an annotated bibliography, which covered the taxonomy and natural history of Asian carp, more specifically bigheaded carp, with an emphasis on its invasion in the Southeast," he said. "I also included information about environmental and economic effects, as well as management, distribution and expansion details."

The bibliography serves as a starting point for future research on Asian carp. "Bigheaded Carps: An Annotated Bibliography on Literature Composed from 1970 to 2014" is available at msucares.com/pubs/publications/p2890.pdf.

Along with an informational booklet and information on the CRHWC website, the bibliography helps educate the public and various stakeholders on the subject.

Smith stressed the importance of individuals understanding what to do when they come in contact with Asian carp.

"Never transport, relocate or release Asian carp into a body of water," he said. "Also, be aware of the potential dangers when boating or fishing. People need to be a part of the solution; this is where public education and outreach come into play."

"If people know how to handle this species, everyone can do their part to help solve the problem, by slowing down the invasion," he said.

To learn more about invasive species, visit the CRHWC website at www.humanwildlifeconflicts.msstate.edu.