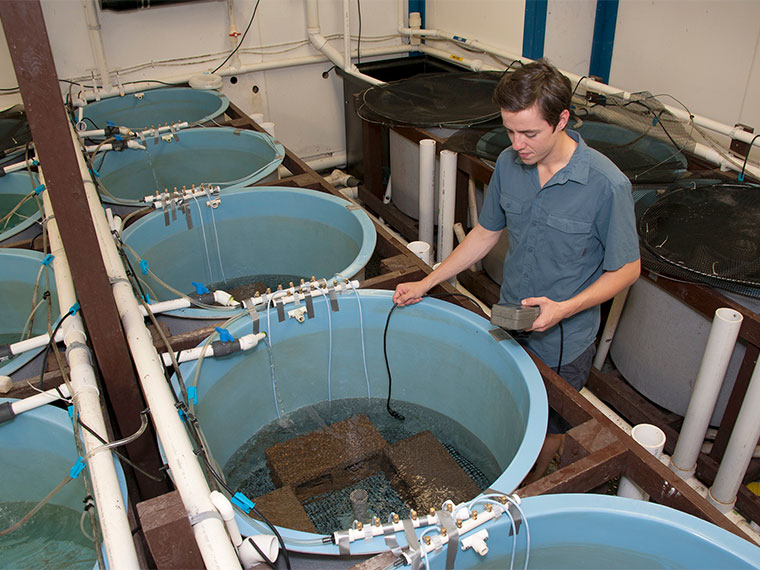 What if conditions could be controlled within hatcheries so the intense seasonal workload could be dispersed over time? This ability would be especially beneficial for the popular black, white, and hybrid triploid Magnolia crappie.

In collaboration with the Mississippi Department of Wildlife, Fisheries, and Parks (MDWFP), Charlie Culpepper is studying methods to better manage and optimize crappie reproduction. Culpepper, a graduate student in the MSU Forest and Wildlife Research Center, said he hopes his research will aid MDWFP fish biologists by providing reliable and effective breeding alternatives to the present system.

"I'm looking at hormone-induced and out-of-season spawning, as well as the cryogenic preservation of sperm," Culpepper said. "Current methods require the collection of females for captive spawning within a very narrow and difficult-to-determine time frame for fertility. While sperm is present in male crappie at any time, it's typically collected when needed for fertilization."

This approach means hatchery personnel are collecting material from both males and females during the same time frame, which often overlaps the reproductive windows for multiple fish species produced at the hatcheries.

Mississippi hatcheries produced more than 3.7 million fish between June 2013 and December 2014. Of these, more than 500,000 crappie were used to stock Mississippi lakes.

Being able to preserve viable sperm and to induce female spawning in a tank system without seasonal restriction would allow fish hatchery biologists to manage the reproduction process and timing. This ability would stabilize the workflow and potentially increase hatchery production of crappie fry, which are raised to fingerling size before being released. Culpepper's research has already identified effective methods that could be used to improve current practices.

He tested three common spawning-induction hormones and identified a preferred treatment. Additional testing to confirm and specify these findings is planned for this year. If this research were applied, fish hatcheries would be able to collect female crappie without missing the natural spawning window. The new method would save time and money, and it could also improve the success rate of reproduction because more variables are controlled.

"This development improves two aspects of crappie reproduction efforts," Culpepper said. "There's a management efficiency benefit by the reduction in labor and cost when you take half of the fish out of the picture. There's also the genetic benefit of selecting certain traits in crappie for breeding."

"You can control water temperature and photoperiod—amount of daylight, amount of nighttime—which, in effect, controls the season for spawning," Allen said. "Once fish are reproductively mature, then you can induce spawning with a hormone treatment."

"The crappie brood stock breeding window is very short, and the conditions must be optimal," Holman said. "Charlie managed water quality, temperature, and light, which lengthened the window for brooding breeding in a hatchery setting."

If manipulating these variables can induce spawning early, larger fingerlings can be stocked, which may improve survival. And that is good news for the recreational fishing industry.

"Crappie is one of the species of inland fishes for which Mississippi is known; it's a delicious fish," Allen said. "Crappie reproduce really well given the right conditions, but every couple of years the population will drop, presumably because you don't have proper spawning conditions. Our goal is to help recreational anglers have a consistently good experience."

Mississippi is home to more than 350,000 people who love to fish, and more than 40,000 out-of-state guests buy fishing licenses here each year, generating $528 million in economic activity in the state.