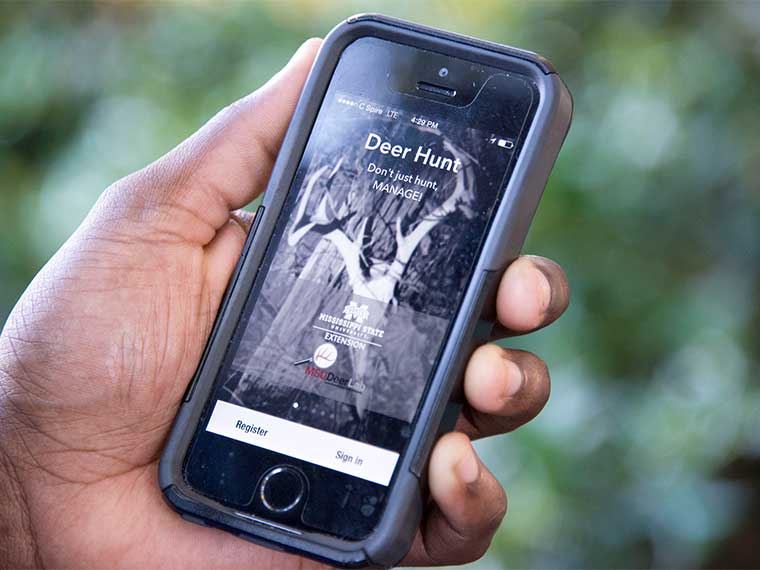 Hunters can go into the woods armed with the knowledge of Mississippi State University deer experts, thanks to a newly updated MSU phone app called "Deer Hunt."

It allows hunting club members to record observations and harvest data to share with hunting partners; manage stand locations and identify occupied stands; and view summaries of deer seen and harvested by stand, hunter and entire property. The deer lab recently released Version 2 of the app with improved functions based on experiences with the 2014 version.

"Two big improvements include a version that works on the Android operating system and the ability to generate observational and harvest reports online," said Steve Demarais, professor and researcher in the MSU Forest and Wildlife Research Center.

Other updated features allow hunters to access weather information, such as wind speed and direction, which helps them find the best locations in the field for deer-sighting opportunities.

"The most exciting feature of this app is the ability of groups of hunters to document their collective experiences observing and harvesting deer," Demarais said. "You no longer have to tell your hunting buddies what you're seeing; if they're part of the group, they can access the latest data."

This feature also allows state deer biologists to have real-time access to what hunters are seeing and harvesting at the county or regional level.

"There is no equivalent app on the market," Demarais continued. "Our app is superior to anything out there because it provides real-time summaries of deer observation and harvest rates based on actual hunter effort."

"The first goal was to teach hunters and managers the value of observational data," Strickland said. "For decades, biologists have used harvest data to track changes in the deer population; however, harvest data can be biased. Hunters may be selecting certain animals for harvest that are not representative of the population at large."

"This makes collecting observational data with our app so important. You get a more complete picture of the deer population," he said.

Traditionally, hunters have been reluctant to collect observational information because they had to write down details about their hunts, including hunt duration, time of day and number of deer sighted. Also, biologists could not analyze this information until hunting season had ended.

"This is where our Deer Hunt app comes to the rescue," Strickland said. "Users record observational data and generate reports in just a few clicks."

The app will also educate hunters and managers about deer movements.

"Hunters can learn which stands or areas are more productive, what time of day more deer are sighted, what time of year mature bucks are observed and much more," Strickland said. "That's why we added the catch phrase, 'Don't just hunt, manage,' under the name of our app. By simply recording observational data while hunting, you can produce a very powerful tool for both hunting and managing the deer herd."

The researchers credit their successful app not only to their work with the MSU Extension Service, but also to the help and input of the deer biologists and hunters who made their informational needs known over the years.

Scott Edwards, wildlife research coordinator for the Mississippi Department of Wildlife, Fisheries and Parks, offered his agency's perspective on the app and its updated features.

"We are very excited to partner with MSU in developing cutting-edge resources that help our agency and Mississippi's sportsmen better manage wildlife populations," Edwards said. "This app will provide us with a wealth of observational and harvest information, in real-time, so that we can better understand deer movements and harvest during hunting season."

MSUES Deer Hunt can be downloaded free from the iTunes app store for Apple devices. For Android devices, search MSU-ES Deer Hunt to find it on Google Play.