MSU Bass Fishing Club ranked No. 1 in Cabela's School of the Year race By: Sasha Steinberg 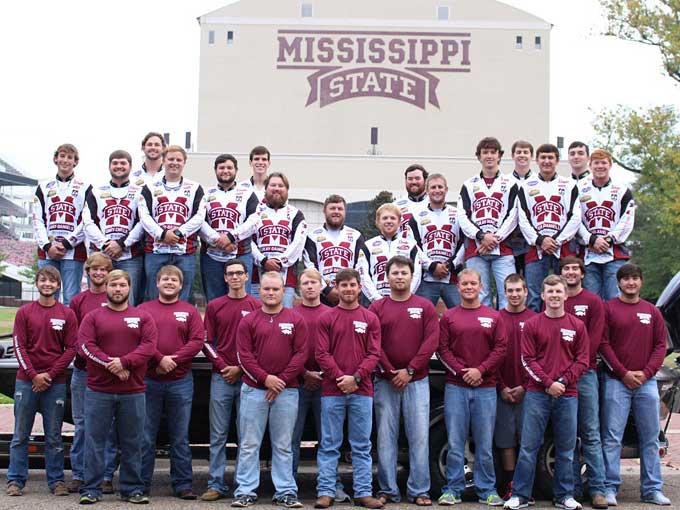 Mississippi State's Bass Fishing Club currently is ranked No. 1 nationally in the race for Cabela's School of the Year title.

Under the leadership of president Jeff Roman Clayton IV, a junior forestry/wildlife management major from Theodore, Alabama, the team has a commanding 20-point lead in The Association of Collegiate Anglers-sponsored competition. It is followed by teams from the University of Alabama and Bethel University.

Comprised of 43 members, the Mississippi State club is one of many organizations that offer participation through the university's recreational sports department.

"Being at the top of the Cabela's School of the Year race is a big milestone for our club," said Joseph R. "Joe" Marty, 2015-16 team treasurer and forest resources/wildlife and fisheries doctoral student in the College of Forest Resources.

"It has been a goal of ours for a few years now, and it feels great to finally accomplish it," four-year member Marty said, adding that "our goal now is to remain on top and finish the year ranked number one."

Between now and the start of the fall 2016 semester, Marty said the club will be competing at 10 more sanctioned events, as well as five or more smaller events as far west as Texas and far east as Florida.

On April 2, the club is sponsoring a fundraising tournament at the Ross Barnett Reservoir on the Pearl River.

Additionally, the club is selling t-shirts and hats, proceeds from which will serve as the group's main source of funding throughout the year. For more information about the tournament or to purchase club merchandise, visit the MSU Bass Fishing Club's Facebook page at http://tinyurl.com/jbt5zgb.

Marty said funding also is provided by a number of sponsoring companies, whose logos are featured prominently on club members' jerseys.

"We would like to thank the university and our sponsors, as without them, we wouldn't be able to travel and fish competitively," he emphasized.

Anyone looking to become a well-rounded and competitive fisherman or woman is welcome to join the club, Marty said. Members typically meet about twice a month. All members must pay $20 in annual club dues.

"We gain valuable experience on lakes all over the southeastern, central and northern United States, and also are active within the community when we are not fishing in tournaments," Marty said.

Along with volunteer efforts and donations of fishing clothing to the Palmer Home in Columbus, members participate in and contribute to such ongoing university fundraising events as the Turkey Trot and Relay for Life.

Named the university's 2014-15 Sport Club of the Year winner, the club was recognized last May by the ACA with a Cabella's Collegiate Bass Team of the Week designation.