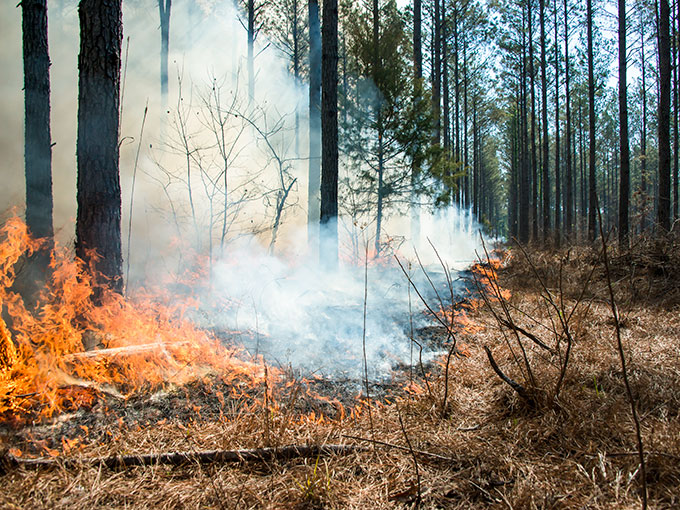 Many people are conditioned to think that any fire in the forest is a bad thing, but controlled burns prevent wildfires from being a problem in the woods.

Humans are the primary cause of forest fires in Mississippi. In 2015, there were about 1,800 wildfires in the state; lightning caused only eight of them. These fires affected an average area of 13 acres, for a total of about 23,000 acres burned. February and March face the highest risk of forest fire in Mississippi.

According to the Mississippi Forestry Commission, prescribed fires controlled undergrowth across about 21,000 acres in 2015, with three-fourths of these burns on private lands.

"In Southern pine stands, prescribed fires knock back young hardwood trees, which are less resistant to fire than pines," Alexander said. "Knocking back these hardwoods opens up space and creates higher light for young pine trees to grow. This also removes a layer of vegetation that can be used as a climbing surface by predators of protected wildlife."

"Prescribed burns remove fuels, like dead wood and leaf litter," she said. "If fuels build up, there is a greater likelihood that any unintentional ignition could lead to a severe fire that kills desired vegetation, removes organic material from soils or even spreads dangerously."

Fires also create better habitat for wildlife by opening space for animals to forage and creating conditions for growth of a new flush of green vegetation.

"This is one reason prescribed fires can be really useful, because they are only set under prescribed conditions, which can prevent fires from burning hotter and more severely than desired," Alexander said. "When fires are prescribed, overstory trees are generally unharmed, so recovery can occur quickly, within a few months to a couple of years."

"In contrast, severe fires, such as those that occur when fuel loads have had a chance to build up, can damage and kill large trees and remove critical organic material from soils, causing recovery to take decades, if at all," she said.

Scott Roberts, a Forest and Wildlife Research Center professor, said the presence of a spark does not guarantee a fire will start.

"If fuel moisture levels are high, probably nothing will happen because wet fuels don't burn well," Roberts said. "Even when relatively dry, large fuels such as logs and branches do not ignite easily, so even if you have a lot of fuel, the chance of an ignition from a spark or ember is relatively low. But if they do get ignited, you could have a fairly intense fire."

"The risk of ignition is much greater for smaller fuels like pine needles and small twigs. And once smaller fuels ignite, the chances of the larger fuels igniting increases," he said. "Once a fire does get started, the amount of fuel present is going to affect the intensity and severity of the fire."

To minimize their risk of forest fires, landowners can reduce the amount of fuels present. One way to do this is through regular prescribed burns, which can be contracted through a certified prescribed fire manager to limit liability. Contact the Mississippi Forestry Commission to find a nearby fire manager.

"Ladder fuels can lead to a fire spreading into the crowns of the trees, which clearly can result in a more damaging fire," Roberts said.

Prevention also includes limiting fires caused by negligence or accidents, such as escaped prescribed fires, landowners burning garbage or yard wastes, running a chainsaw without a spark arrester, abandoning a campfire without putting it out and throwing cigarette butts from vehicles.