Prehistoric fish discovered in the depths of Bluff Lake By: Sarah Buckleitner 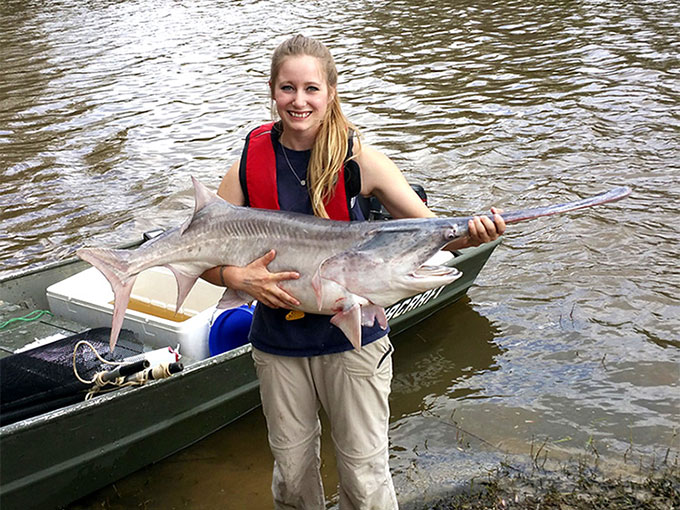 Alligators aren't the only prehistoric creatures lurking in the depths of the Sam D. Hamilton Noxubee National Wildlife Refuge's waterways.

Mississippi State researchers recently recorded unexpectedly high numbers of paddlefish near the refuge's spillway—a shocking discovery given the size of the waterway and what is currently known about paddlefish biology.

Paddlefish are a large fish whose lineage dates back to the late Cretaceous Period (roughly 70 million years ago). American paddlefish are native to the Mississippi River Basin, and traditionally have been thought of as a species that prefers large waterways.

However, after initial exploration revealed that there were paddlefish in the spillway for Noxubee's Bluff Lake, researchers launched a full scale investigation to garner estimates of population size and to determine what factors drew them to the area.

"It was pretty astounding," said Michael Colvin, assistant wildlife, fisheries and aquaculture professor in MSU's Forest and Wildlife Research Center. "We pulled up all these paddlefish using gill nets. They can grow to over five feet long, so it was fairly dramatic to see these giant, prehistoric fish come out of that small area."

Given the number of paddlefish they caught, researchers estimate there are up to 200 individuals in the spillway area. This population of paddlefish is unique because of the high densities of fish in such a small system and the fact that they appear to be year-round residents. Because of these aspects, the study has the opportunity to contribute information on an unexplored aspect of paddlefish biology.

"Initially, we thought that we were catching them during migration, and they were coming up from the Tennessee Tombigbee waterway. However, as we get later into the year and they're still present, we're beginning to wonder if it's a resident population," explained Colvin.

In order to help answer this question, 30 fish have been tagged with acoustic tags, which will trigger sensors set up along the Noxubee River with their unique IDs, enabling the researchers to track where each individual fish goes. If the paddlefish are migrating, they will be recorded in different geographic areas, and the researchers will have a better idea of where they are coming from, and their usual migration pattern.

Paddlefish are highly migratory; the distance from the Tombigbee waterway to Noxubee is tiny compared to some of the epic treks paddlefish take. Some tagged in the Delta have even been recaptured in the Missouri River.

Collaboration with the Alabama Game and Fish Division has allowed the researchers to track the fish even as they move into the Tennessee-Tombigbee River. They have set up sensors within Alabama that share data with those in Mississippi, allowing the researchers to gauge just how far these fish are traveling.

Because paddlefish have never been seen in such high densities in a small system like this one, Colvin and colleagues are not sure what to expect from this population. However, they suspect that the spillway's management creates conditions that attract the fish, so they may veer off course from their traditional migratory route and end up staying through the year.

This could create problems for the species, which already is endangered and even extirpated in parts of the United States due to over-fishing for caviar.

"If the paddlefish are being drawn to this area due to the spillway conditions and then aren't spawning—or aren't spawning successfully—it could be an issue for the species," Gilliland explained.

"Mostly paddlefish are studied in really big systems—like the Mississippi River, one of the biggest systems. No one has documented them in a small system like Noxubee, so this is really unique. Even just comparing our results so far, I can tell that they're different. And it's important to know if the fish are spawning in this system because if they aren't, that's potentially a huge loss of genetic diversity for the species," explained Gilliland.

To try to determine whether they're spawning, Gilliland has been sampling the area on a regular basis in search of young paddlefish. So far they haven't found any, and it's getting late in the season.

"We've found gravid (pregnant) females, and at this point in the year, you would expect them to have already spawned," Gilliland said.

The next step for this project depends on what they discover.

"I think the most important takeaway from this project is that you should never underestimate a habitat. I never in a million years would have looked at that spillway and guessed prehistoric fish swam right below the surface," said Gilliland.

The U.S. Fish and Wildlife Service's Inventory and Monitoring and the U.S. Geological Survey's Quick Response Program are funding this project.