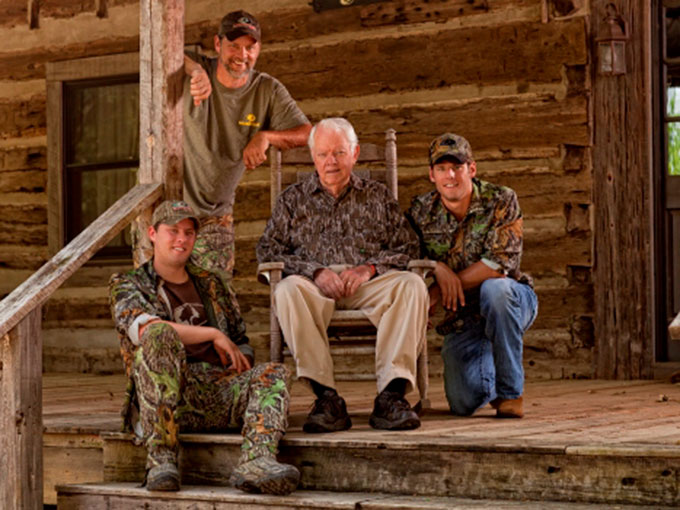 In 1986, just three years after graduating from the Mississippi State University College of Business, Toxey Haas returned to his home in West Point and founded Haas Outdoors Inc., parent company of Mossy Oak brands. Utilizing his education to fuel his passion for the outdoors, Haas revolutionized the modern hunting industry. Today, Haas is helping more students pursue their ambitions through a newly endowed scholarship in the MSU College of Forest Resources.

The Fox Haas Mossy Oak Endowed Scholarship was established by Haas to honor his father and fellow MSU alumnus, Carl Fox Haas. Often referred to by many as simply, "Mr. Fox," the avid sportsman inspired his son's lifelong love for hunting from an early age.

"My dad has always been my hero and my biggest influence," said Haas. "He not only taught me to hunt and be a woodsman, but more importantly he taught me the value system for life. Nothing means more to him than his faith, his family, and the earth we are responsible to care for."

Fox, a native of Mobile, Alabama, graduated from then Mississippi State College in 1956. During his time as a student, he met his wife, Evelyn Nash, a fellow 1956 classmate. After a 30-year progressive career, Fox retired from West Point-based Bryan Foods in 1990 to join his son in the family business. He currently serves as secretary and treasurer of Mossy Oak.

"My dad is, in my opinion and also countless others, the model 'conservationist,' which by definition requires giving back more than you take," Haas said. "This scholarship is not just a way for our family and the Mossy Oak brand to honor my dad, but also to hold him as the example in this field. Mississippi State has always been a huge priority in his life and although he has received many accolades and honors, I believe he considers this one his greatest."

The Fox Haas Mossy Oak Endowed Scholarship will be awarded to students enrolled in the College of Forest Resources. Candidates for the award must submit a resume and brief essay, and be recommended by at least one faculty member. Preference may also be based on financial need.

In addition to his parents, Haas also shares his alma mater with his wife, Diane, who graduated from the MSU College of Education in 1983, as well as the couple's three children, Sara Frances, Daniel and Neill. Through the Fox Haas Mossy Oak Endowed Scholarship, the family's maroon legacy will ring true for future generations.

Haas' support also extends to MSU athletics, including co-developing the Mossy Oak Golf Club, which is set to open this fall, with fellow MSU alumnus George Bryan. The facility will serve as the official home of the MSU men's and women's golf teams. He also contributed to the collaborative creation of the Diamond Dawgs' Mossy Oak camo-pattered jerseys, the first of their kind in collegiate baseball, which the team sported against Eastern Kentucky in the spring of 2015.

Mossy Oak was also the initial and pioneering sponsor of the Catch-A-Dream Foundation, which was based at Mississippi State University from 2003 to 2012.

In pursuing his passion, Haas has transformed the sport of hunting, making the Mossy Oak name synonymous with the outdoor lifestyle it serves. Now, the Fox Haas Mossy Oak Endowed Scholarship will also synonomize the brand with educational opportunities at MSU, and will provide perpetual support for future success as ambitious students pursue their own passions.