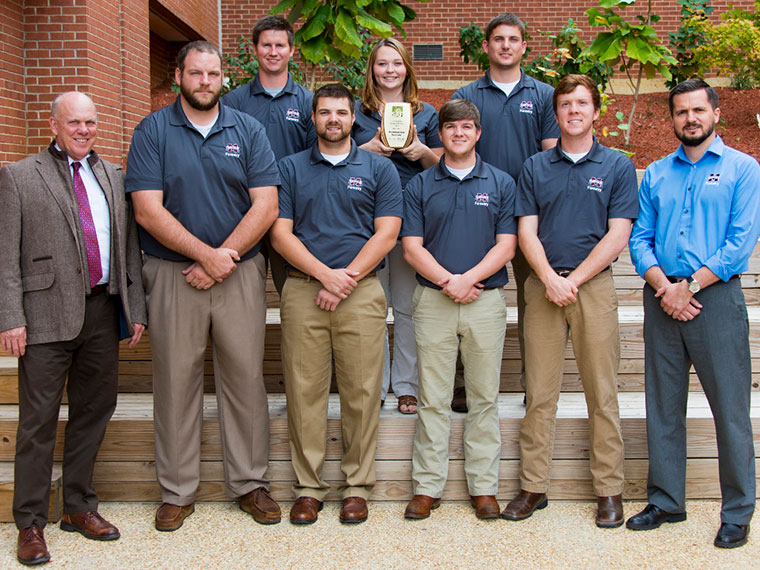 Student members of the Society of American Foresters at Mississippi State again are tops among their U.S. peers.

As in 2011, the university SAF chapter has been awarded first-place honors.

Also, the 30-plus member group is included for the 18th consecutive year among the top three of nearly 40 student chapters located from Virginia to California and Maine to Arizona.

The first-place honor is based on accomplishments throughout the academic year, with an emphasis on campus and community service and outreach programs. Professional engagement and organizational management also are considered.

MSU faculty adviser Robert K. Grala and chapter officers traveled to Madison, Wisconsin, recently to accept the award and an accompanying $500 honorarium as they participated in SAF's 2016 national convention.

Established at the turn of the 20th century, the national organization currently includes some 12,000 professional members. Headquarters are located in Bethesda, Maryland. For more, visit www.eforester.org.

Grala, an associate forestry professor in the College of Forest Resources, has served as faculty adviser since 2007.

"The SAF student chapter provides students with a platform where they can be involved academically, professionally and with the community," he said. "We have a very good group. The students strive each year to do more and set a new standard. It takes a lot of hard work and dedication on their part."

During the past year, Grala said the chapter members volunteered at more than 15 community events, including the Wildlife Outdoor Learning Festival and the college's popular Wood Magic Science Fair. They also participated in the Wildlife Festival and Bioblitz held at the Natchez Trace Parkway Visitor Center in Tupelo to promote interest among young children in the natural resources.

"We helped children build and paint birdhouses to raise awareness about habitat in the National Park Service as part of the organization's 100-year celebration," said Savannah Fenaes of Pace, Florida.

An MSU senior forestry major and current chapter president, Fenaes has been an active member since her freshman year. Earlier, she was treasurer and sophomore class representative.

Fenaes said bringing industry professionals regularly to campus for interactive programs with forestry majors also is among her major leadership duties. This year, representatives of nine companies made presentations and conducted internship and employment interviews, she added.

"The organization helps students develop leadership skills, gain access to professionals and give back to the community," she said. "We get a chance to learn what the field of forestry is all about."