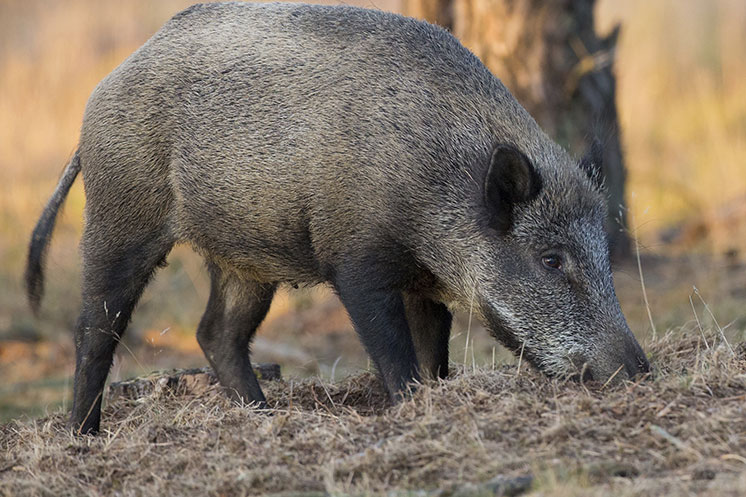 Ecological research by faculty members in Mississippi State University's Forest and Wildlife Research Center and Department of Biological Sciences is featured in a recent article by National Geographic.

Titled "How a 3-Ton Mess of Dead Pigs Transformed This Landscape," the article discusses a mass mortality experiment led by Marcus Lashley, assistant professor of wildlife, fisheries and aquaculture at MSU's College of Forest Resources. The article is available online at http://news.nationalgeographic.com/2017/09/dead-feral-pig-science-ecology/.

Barton said the purpose of the experiment was to explore the effects that a mass mortality event, or a large number of deceased animals in an environment, could have on an ecosystem and its inhabitants. Since they could not predict a mass mortality event, Barton and his colleagues created their own, utilizing the university's John W. Starr Memorial Forest off Mississippi Highway 25 south of Starkville as the research site.

Lashley contacted colleagues at USDA and other state and federal agencies that have removal programs in place to help with the invasive feral swine population, which causes problems for agriculture in the South, especially the Mississippi Delta. His efforts helped the team acquire 6,000 pounds of invasive feral swine carcasses for the summer 2016 research experiment.

"Last July, we placed the carcasses in square plots in the forest and left them to rot," Barton said. "Within five days, bacteria developed, vultures, maggots and microbes appeared, and the pig carcasses were gone. We also noticed herds of armadillos that had moved into the area to get at the maggots."

The team observed a decrease in the pig carcass population as a direct effect of the maggots, vultures and armadillos. The indirect effects experienced by trees and plants also were intriguing, Barton noted.

"Disturbance from the maggots and the armadillos that came behind them caused a change in the leaf litter and soil, which affects the plant community growing in that ecosystem," Barton explained.