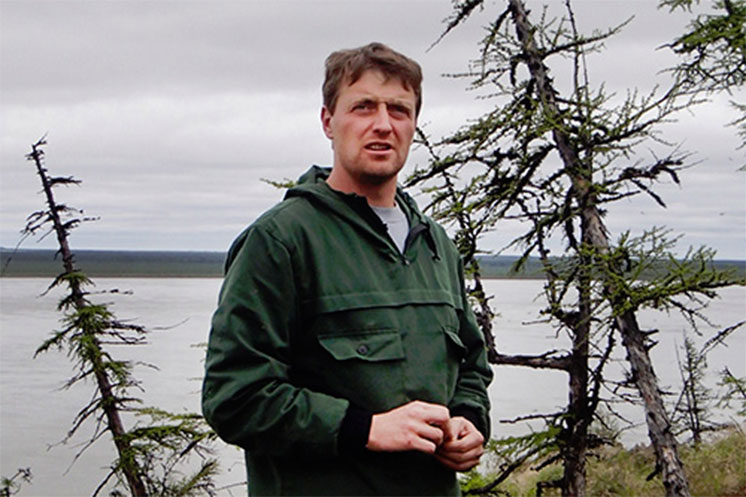 A renowned Siberian scientist will present his work on rewilding large herbivores in Siberia during a lecture at Mississippi State Dec. 8.

Nikita Zimov, a Russian scientist and director of Pleistocene Park, a 14,000-acre nature reserve in the Siberian Arctic, will present a seminar titled "Rewilding megafauna in the Siberian Arctic to mitigate climate change." Open to all, his presentation begins at 2 p.m. in Tully Auditorium at Thompson Hall.

The departments of Forestry and Wildlife, Fisheries, and Aquaculture are co-hosting Zimov's talk. Heather Alexander, assistant forestry professor, and Marcus Lashley, assistant wildlife, fisheries and aquaculture professor, initiated Zimov's invitation. Alexander and Lashley are both in the MSU College of Forest Resources. This past summer, the pair collaborated on a pilot study in Pleistocene Park, where five species of herbivores have been rewilded or reintroduced. Researchers installed game cameras across a gradient of animal use while also measuring soil conditions and vegetation characteristics.

Lashley studies disturbance ecology, animal behavior and complex trophic interactions in food webs, while Alexander focuses on climate warming, wildfire severity and forest recovery. Alexander has traveled to Siberia every year since 2010, studying the region's massive wildfires and their impact on climate change. Zimov, who runs the Northeast Science Station in Cherskiy, Russia, has served as a collaborator on Alexander's various projects in the area.

Zimov's hypothesis, and the focus of his talk, is that large herbivores will transform Pleistocene Park into an eventual grassland, or a steppe, thereby protecting vulnerable permafrost, or perennially frozen soils. Specifically, Zimov expects that rewilding will slow the melting of yedoma permafrost, a carbon- and ice-rich Pleistocene-age permafrost found in vast quantities across the Siberian Arctic.

Alexander explained that the longer the yedoma stays intact; the less carbon will be released into the atmosphere.

"Yedoma, which is made up of 30-50 percent ice, exposes ancient soils to the atmosphere when it melts. Carbon that has been locked up for several millennia begins to break down," Alexander explained. "Nikita proposes that bringing the landscape back to what it looked like during the Pleistocene Age will help slow this melting process."

Alexander said that during the Pleistocene Age, often referred to as the Ice Age, a high density of megaherbivores including woolly mammoths roamed the land. These animals kept the system in an active grassland state because they pushed down woody vegetation while grazing. Zimov purports that the animals can protect the permafrost by trampling the snow during the winter so that the ground is more exposed to air temperatures and stays colder. He also points out that the light-colored grasslands will reflect more of the sun's rays versus dark forests, which absorb it.

Thus far, Zimov and his father, Sergey, who began rewilding the area in 1988, have reintroduced bison, musk ox, moose, horses and reindeer to the park.

The Zimovs' passion project has been featured in such publications as Science, The Atlantic, PBS News Hour, The Telegraph and more.