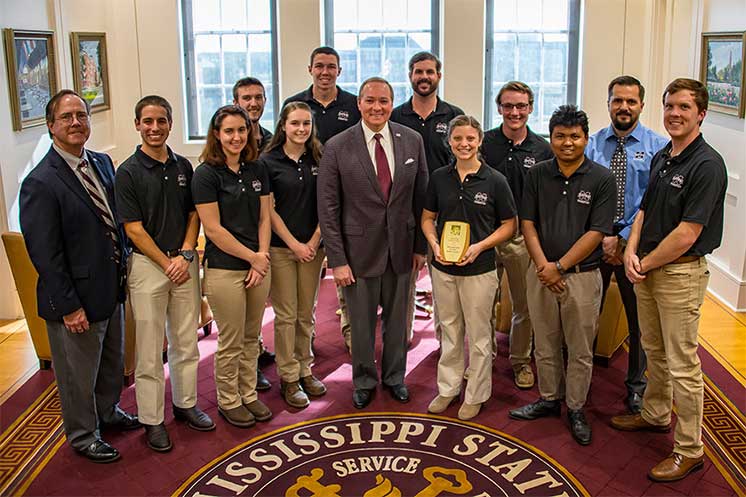 The student chapter of the Society of American Foresters at Mississippi State University is first once again in the annual SAF Outstanding Student Chapter national competition for the 2017-2018 academic year.

Robert K. Grala, a forestry professor in College of Forest Resources, who has been the chapter's faculty advisor for more than a decade, said the 20-year legacy of placing first, second or third in the competition demonstrates the quality of MSU forestry students.

"It shows that we have exceptionally solid, active students who are very professional," Grala said.

The competition criteria include service to SAF members, service to their university and involvement with other natural resource organizations, outreach and the community.

Grala pointed out that student leadership has been central to the chapter's success.

"Our chapter has demonstrated commitment for many years. A part of that is the fact that the students from previous years have set the bar for incoming students, so the next generation tries to match these achievements," Grala said. "Also, we have been very lucky to have had active officers who help to invigorate the chapter. They encourage new students, and participate in and lead different activities, providing the example that encourages others to participate and volunteer."

Other chapter accomplishments include earning first place in the quiz bowl held at SAF's 2017 national convention, as well as placing high in individual competitions at the Southern Forestry Conclave, an annual gathering of forestry clubs from around the southern United States.

William Griffin, 2017-2018 chapter president, initially got involved in SAF at the prompting of professors and upperclassmen.

"It was a great way to make friends and contacts right off the bat. The opportunity to connect is the most powerful aspect of SAF," Griffin said. "When I think of all the friends and connections that I made in college, be they MSU students, industry professionals or individuals from other forestry departments, I came to know so many of them through my involvement in SAF."

For more on the MSU SAF chapter, visit www.cfr.msstate.edu/studentorgs/saf.

Learn more about the College of Forest Resources at cfr.msstate.edu.