A quill in the cap for quail management By: Vanessa Beeson 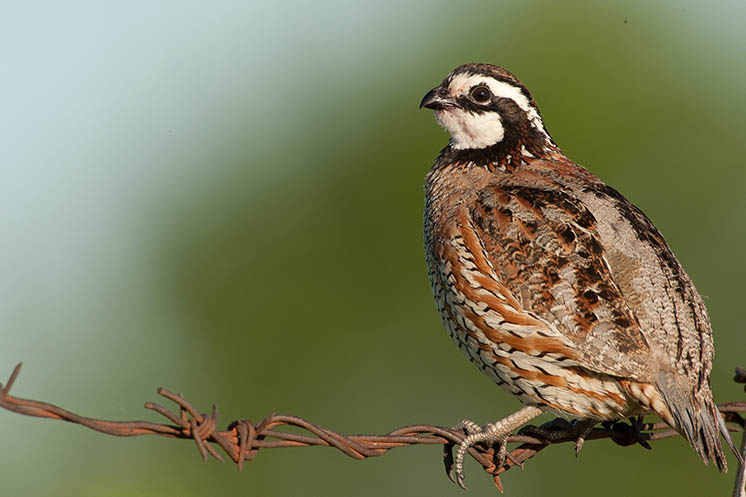 A century ago, the bobwhite quail, named for its distinctive whistle, was common throughout the Southeast. In 1966, however, scientists began tracking a drastic population drop. Over the next fifty years, the species declined by 85 percent. Forest and Wildlife Research Center scientists are doing their part in restoration efforts of this granivore, whose storied legacy is steeped in tradition.

Not only was the bobwhite's song once ubiquitous across southern farmland and forests, large quail plantations, which intensively managed bobwhite quail as a game bird, began cropping up in the early 1900s. While large numbers of birds no longer grace working agricultural and forest landscapes, these historic plantations are the last strong hold of resilient populations in the Southeast and essential to restoration efforts today.

Dr. Wes Burger, FWRC associate director, partnered with Dr. Bill Palmer, director of research at Tall Timbers Research Station, in an effort to help land managers produce and maintain high populations on these conservation lands. The study, conducted in a pine and grass ecosystem known as the "Redhills" of northern Florida and southern Georgia, sought to determine how food availability influences the way quail move and forage.

He explained that bobwhite quail need three habitats to thrive: annual weed communities, which provide brood habitat and seeds the quail forage on; perennial native grasses for nesting habitat; and shrubby cover up to six feet to protect from weather and predators.

"If you think about the successional changes over 50 years from bare soil to mature forest, these plant communities thrive in a forest's first seven years or so, although these same components can occur in the ground cover of a mature forest if it has an open canopy," Burger said.

He explained that while the forests and agricultural landscapes of the early twentieth century offered these plant communities in abundance, the landscape is very different today.

"In fire-dependent forest systems of the Southeast, constant disturbance set back forest succession. Now, we exclude natural fire in an industrial forest model characterized by high stocking rates and dense canopies that shade out those plant communities," Burger said. "Similarly, agricultural landscapes were ideal for quail before native grasses like little bluestem and broomsedge were replaced with improved forages such as Bermudagrass and fescue and herbicides were broadly used to control weeds in row crops. Field expansion through elimination of non-crop natural communities such as fencerows and riparian areas further diminished habitat for bobwhite in farmlands."

However, populations persist and even thrive where land management practices create and maintain those essential habitats. Increasingly, land managers are adopting practices designed to give bobwhite every opportunity to thrive. One practice common on intensively managed properties is spreading of high energy supplemental feed. Supplemental feeding provides researchers an opportunity to not only evaluate the potential benefits of this practice, but to also ask fundamental ecological questions about how food availability affects resource selection, space use, movements, and individual fitness. That's why researchers sought to measure the persistence and availability of supplemental feed over time. They spread two rates of grain sorghum evenly along feeding trails across 10 percent of the landscape. Feed trails were distributed so that bobwhite in every portion of the landscape had access to an abundant and high energy food source. The first rate was equivalent to two bushels of sorghum per acre, per year while the second equaled a half a bushel per acre, per year. The team compared both levels against the control of natural background food available in the environment, evaluating food abundance every three days and replenishing feed every 15 days.

Bobwhite, and seemingly every other granivore in the landscape, readily consumed the high energy food. The two bushel treatment produced 100 seeds per meter square on day one declining to 20-25 seeds in the same area by day 14. The half bushel treatment started with 22 seeds over the same area and 15 days later declined to zero.

While food abundance didn't affect movement rate or home range size, it did affect the amount of time birds spent foraging. In high density food situations, birds spent 10 percent of their time foraging compared to 20 percent when food was scarce. Resource availability also influenced the birds' space use within their home range, with birds in food-rich environments foraging in more concentrated locations than birds in low food density situations.

At high density, grain sorghum made up a high proportion of the birds' diet. At low density, sorghum was a minor component of the diet. Experimental manipulation of food availability allowed researchers to estimate the birds' "giving up density," which indicates when an animal will stop foraging for a given food no longer available in abundance.

Burger said the giving up density, which is about 24 seeds per meter square, when converted to a caloric value is also an indirect measure of food availability across the landscape.

"Foraging animals move from patch to patch sampling but when they find a food-rich patch they spend more time there. Theory predicts that they should forage in that patch until its availability is lower than the average food availability in other patches," Burger explained. "The rationale is that if you left that patch to find another you'd have a 50/50 chance of finding a more food-rich patch."

Burger also pointed out the practical implication of the research.

"We learned that supplemental feeding does affect quail behavior and foraging efficiency. In some situations supplemental feeding has also been shown to increase survival or reproductive success. In particular, supplemental feeding prior to the nesting season seems to bring birds into breeding condition earlier and result in greater recruitment," Burger said. "Land managers, if they intend to feed, just need to be strategic and feed at a density that approximates 100 seeds per square meter every 14 to 15 days because after that the residual food left in that environment will fall below the bird's giving up density."

Ryan Miller, an MSU wildlife, fisheries, and aquaculture master's student who graduated in 2011, conducted the field research, which was funded by Tall Timbers Research Station and the Forest and Wildlife Research Center.