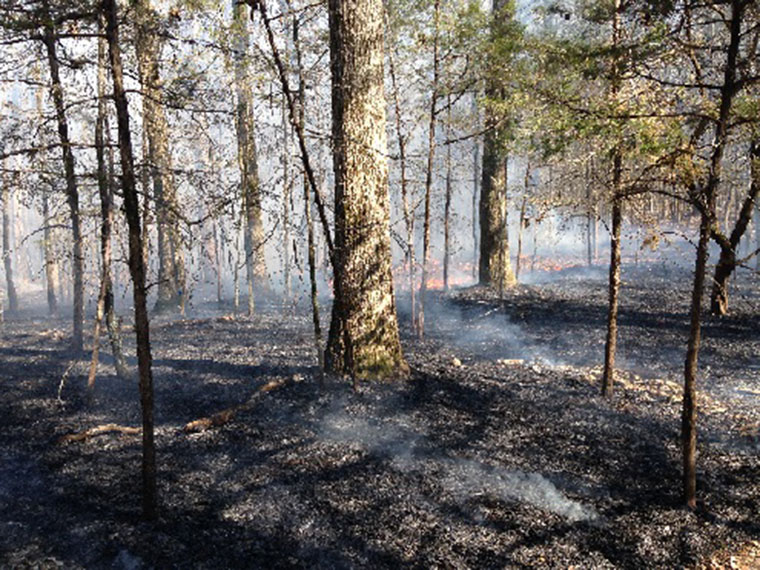 When we think of wildfires, images of acres of upland forests ablaze out West may come to mind, however, fires happen each year at home in Mississippi. In 2017, there were 2,318 wildfires which threatened 4,441 structures and burned 33,574 acres across the Magnolia State. But prescribed fires, which are intentionally set under relatively controlled conditions to achieve specific forest management objectives, also burned another 38,826 acres.

Dr. Heather Alexander, an assistant professor who studies forest and fire ecology, has researched how fire can either be used as a tool to manage forests or as a natural disturbance which alters forest ecosystems. She works across a variety of forest types from Mississippi all the way to Arctic Siberia. She began studying fires in the Daniel Boone National Forest in Kentucky as part of her dissertation.

Through that research, Alexander researched the effects of suppressing fires in the Appalachians.

"We suppressed fires for 80 plus years in this country and that has had a lot of ramifications," she said. "It is one reason why we have horrible fires out West now because when systems don't burn like they are supposed to, you can get large fuel loads accumulating to where all it takes is somebody throwing a cigarette out the window or abandoning a campfire under dry conditions to get big fires."

Alexander said the ramifications aren't as severe in the East because these systems are wetter and decomposition rates are higher than those out West, leading to lower fuel loads.

"What we found was there wasn't a huge impact on fuel loads when we burned in the East like people would expect," she said. "That was probably the most interesting discovery is that the burns were such low intensity, and fuel loads were relatively low, so that the fires didn't consume a lot of fuel. There are a lot of other good reasons to burn, but fuel reduction isn't one of them in this case since the fires just don't get that hot."

What Alexander found in the Appalachian study applies to Mississippi forests.

"One thing that I'm doing here at MSU is looking at fire in hardwood forests in Mississippi," she said. "For a long time people thought fire in a hardwood forest was a bad thing and that we should not burn our hardwood stands, but the ecology and research is teaching us that oak forests in the uplands depend on fire. They need fire to come through every eight to fifteen years to clear out the maples, winged elms, and birch, or the oak won't be able to compete."

"In terms of timber, oaks are a premier hardwood timber, so if you want an oak-dominated forest in the uplands, then you have to have periodic fire in the system or some level of harvesting to increase understory light, but generally speaking, it's cheaper and easier to burn than to harvest, especially across large tracts of land," she said. "Fire is not bad. It is a very important disturbance in a forest system and not just with pine," she added.

A few more reasons why prescribed fire is good for the ecosystem is that it manages composition from unwanted species, helps prepare the seedbed, gets rid of pests and pathogens, and in some instances, removes fuels such as dead wood and leaves from the forest floor.

"It's invaluable to have a Bulldog forest site available for research," Alexander said. "We've been so lucky to have a university forest accessible to researchers and students which is what we have at Spirit Hill Farm."