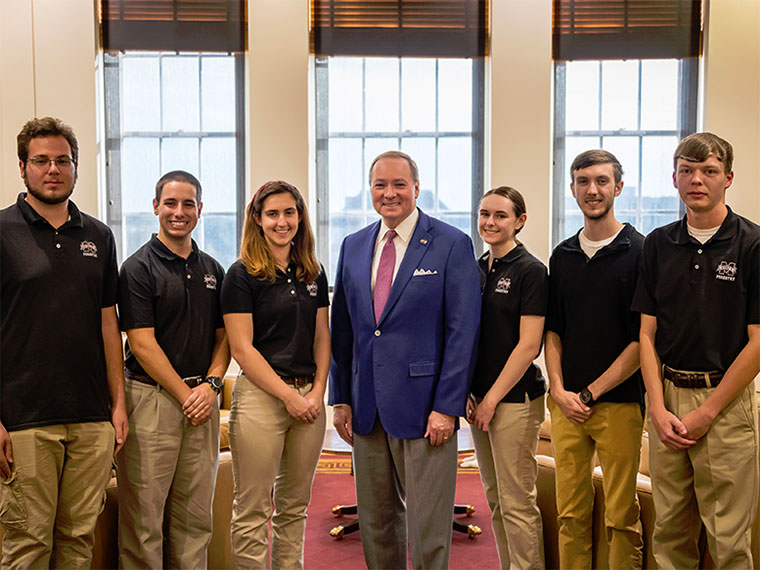 Mississippi State's student chapter of the Society of American Foresters again is claiming a top honor in the national Outstanding Student Chapter competition, a feat accomplished by the organization for more than two decades.

This year, the MSU organization is being recognized as the first-place chapter with officers of the 26-member group recently traveling to Louisville, Kentucky, to accept the honor at the annual SAF convention.

The Society of American Foresters, or SAF, aims to prioritize professional development, community outreach and forest health, and Mississippi State's student chapter has achieved just that, earning first place for the second year in a row. The accolade marks the 21st consecutive year that the university's chapter placed first, second or third nationally.

"Our chapter is full of talented, proactive, hardworking students. Their involvement in SAF gives them a competitive edge in job opportunities. Employers recognize the importance of networking gained through involvement in professional organizations," Grala said.

He also pointed out that the drive to continue the chapter's legacy is led entirely by the students.

"Each year, the students participate as much as possible, and then, the next generation of students sees this legacy and wants to continue it. There's an internal rivalry between years, and the bar only rises," Grala said. "Winning for a second year in a row is a validation and acknowledgement of all the hard work our students put in."

Though SAF takes many factors into consideration when determining the annual winning school, one of the most important is member development.

Rachel Nation, chapter president and a Milton, Florida, native, pointed out that there are more than enough activities to keep MSU SAF members growing.

"The chapter's officers work tirelessly to bring in companies related to forestry, both as a means of professional networking and trade learning. The interviews and internships often offered as a result of these opportunities serve as a testament to the quality of the students affiliated with the chapter," said the senior forestry major.

Though it is primarily a professional organization, members take part in a wide array of volunteer events as well, from keeping the roadways clean through the Adopt-a-Mile program, to teaching young children about natural resources, and cleaning up forests on National Public Lands Day.

The officers also garner new interests through organizing field days and other activities.

When looking ahead to next year, Nation speaks to the significance of the chapter's legacy.

"My goal is to maintain the standard of excellence we've held ourselves to for the past several years. We've won first, second, or third for over 20 years now, but it's really the quality of our members that is important," Nation said.