From the Ground Up: MSU wildlife researchers use UAVs to help conserve bird species, habitats By: Vanessa Beeson 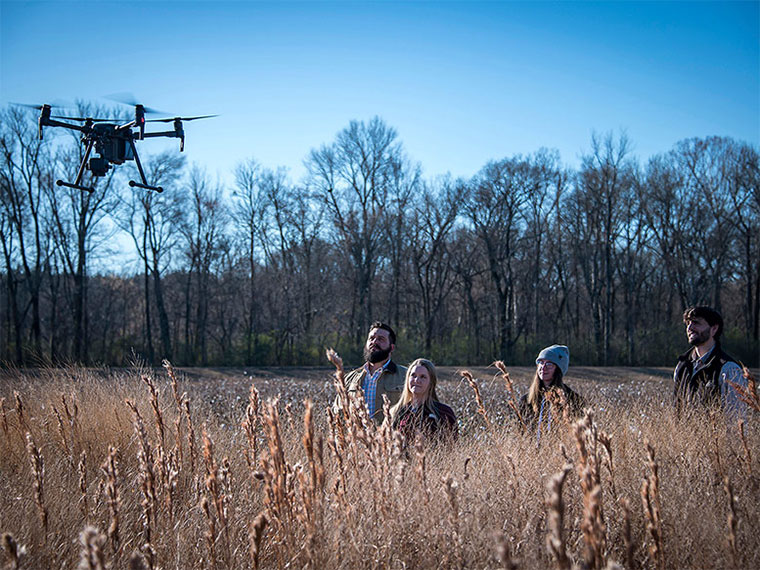 Unmanned aerial vehicles are taking flight to aid Mississippi State researchers in a quest to improve grassland bird conservation, safeguarding the storied feathered vertebrates that are nationally in decline.

McConnell and master's student Megan E. Martin of Mount Vernon, Kentucky, both in the Department of Wildlife, Fisheries and Aquaculture, have obtained a special waiver for their research project's pilot to fly UAVs at night when the birds are in coveys, or groups of about seven to 15.

"Typically, a pilot would fly UAVs during the day, but night is when the temperature difference between the ambient air and the bird's body heat are as far as possible," McConnell said, explaining that, in winter, quail coveys roost in a ring with the birds facing outwards in a pattern that forms a distinctive heat signature. A thermal camera, attached to the UAV, then can detect this heat energy.

McConnell emphasized quail are a major conservation concern across the U.S.

"Quail populations have been declining since the 1890s. Wildlife biologists started quantifying the decline in 1966 and since then, 80 percent of the population has disappeared. Research has shown, however, that in areas where people manage for them, they do very well. A faster, more accurate way to estimate quail populations will make it easier for landowners to better manage habitat for the birds," he said.

Current population estimation methods are labor intensive and not always accurate, he said, "but if this new method using UAVs proves as effective as traditional covey calls, then it will cut down on the amount of labor." He explained, "For instance, at a current 6,000-acre research site, each of the 32 stations requires one person to call for quail, so essentially it would take 32 days for a single person to complete the calls. If we can fly the entire property in a few nights to collect the same or more accurate information, it would cut down on time in a big way."

McConnell said the research may answer one of the main challenges of wildlife biologists.

"I think the sky is the limit in using this technology in conservation. UAVs offer tremendous opportunity for us to find new ways of detecting species and monitoring their abundance and movement more accurately and in a way that doesn't disturb them," he said.

In another MSU study using UAVs to detect grassland birds, assistant research professor Jesse Morrison and master's student Lori M. Hearon of Ethel, both in the Department of Plant and Soil Sciences, hope to identify optimum flight elevation to detect various grassland bird nests. Hearon is an FAA-certified UAV pilot who flies on both projects.

If their study's proof-of-concept research shows promise, the team will use the method to identify actual nests later this spring.

"We developed this project from the ground up, creating simulated nests to place at different heights within the canopy structure of different grass species to see if it is possible to detect them with a UAV. We hope to take the data and develop maps that pinpoint the location of each nest," Morrison said.

"We are trying to see how high we can fly to maximize our flight time and still detect where the nests are in the canopy," Morrison said. "Our original thought was the lower the better, but that hasn't been the case. The higher elevations make better maps."

The Mississippi Agricultural and Forestry Experiment Station research is supported, in part, by the Mississippi Lignite Mining Company's Red Hills Mine.

"The mine was looking for a way to quantify whether or not the reestablishment of native grasses on its land had an ecological benefit, and the mine was most concerned about grassland bird species," Morrison said.

Morrison said that if the project is successful, it will cut down on the time it takes to estimate bird nest numbers in any given grassland.

"Ideally, this research might help us better quantify ecological benefits for both established grasslands and those replanted in the future in an easier and more accurate way," Morrison said.