Legacy of the Lakes: How depth defines lakes in the Delta By: Vanessa Beeson 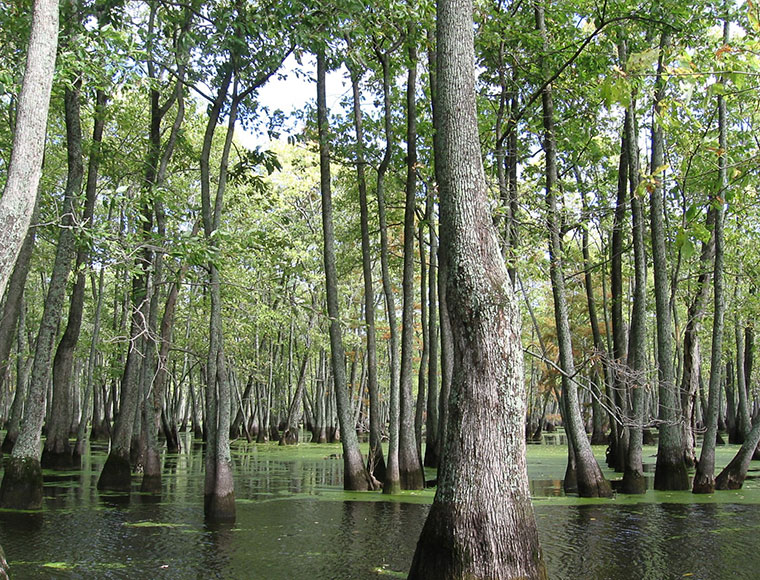 The hundreds of floodplain lakes that dot the landscape of the Mississippi Alluvial Plain between Cairo, Illinois and Baton Rouge, Louisiana tell a story that spans the ages. These lakes were created by the meandering of prehistoric river systems, the Mississippi River, and other contemporary rivers that flow through the valley to join the Mississippi River. While rich in legacy, lakes also serve as a water source for Delta farmers. Forest and Wildlife Research Center scientists are helping to strike the delicate balance between industry and environment, providing insight that helps give farmers the water they need while still protecting the legacy of the lakes.

The Mississippi River Valley Alluvial Aquifer level loses more than 300,000 acre feet per year. Increasingly, Delta farmers turn to lakes as a source for irrigation. Those lakes have a tipping point, it seems, which occurs when water withdrawals negatively impact aquatic health. For several years, the Mississippi Department of Environmental Quality has sought to determine and refine best practices for using oxbow lakes as irrigation resources.

"The agency does a lot of work in the Delta maintaining stream flow and channelization. Maintaining biotic integrity of the lakes is central to their work," Miranda said.

Miranda's team measured the biotic integrity of approximately 60 lakes in the Mississippi Alluvial Valley. In collecting that dataset, they were able to answer a question the Mississippi Department of Environmental Quality had been trying to answer on best practices in irrigation.

"In our study, we found one simple variable that dictates so much of what is going on in the lake—depth. If you tell me how deep an oxbow lake is, I can tell you the likely fish assemblage and physical and chemical characteristics of the body of water," Miranda said. "By better understanding the relationship between depths and environmental and biological conditions, we can identify how deep the lake needs to be to maintain the integrity of its biological and environmental characteristics."

"We evaluated all of the variables and expected things to gradually change including species composition, phytoplankton, and turbidity as the lakes went from deep to shallow. We were looking for a point where change accelerated. We have several graphs that indicate a fast shift in environmental and biological composition happens around two meters. That was the depth the Mississippi Department of Environmental Quality sought to determine," Miranda said.

The team has hypothesized that in lakes shallower than two meters, sediment respiration, excessive turbidity, and seesaw daily temperatures and oxygen cause the observed tipping point.

"The next step is to test this hypothesis to figure out what exactly is causing this shift at two meters. If you know what causes it, you can come up with solutions to address it, which may allow you to draw more water. Now, however, we recommend that we don't draw water from lakes shallower than two meters," Miranda said.