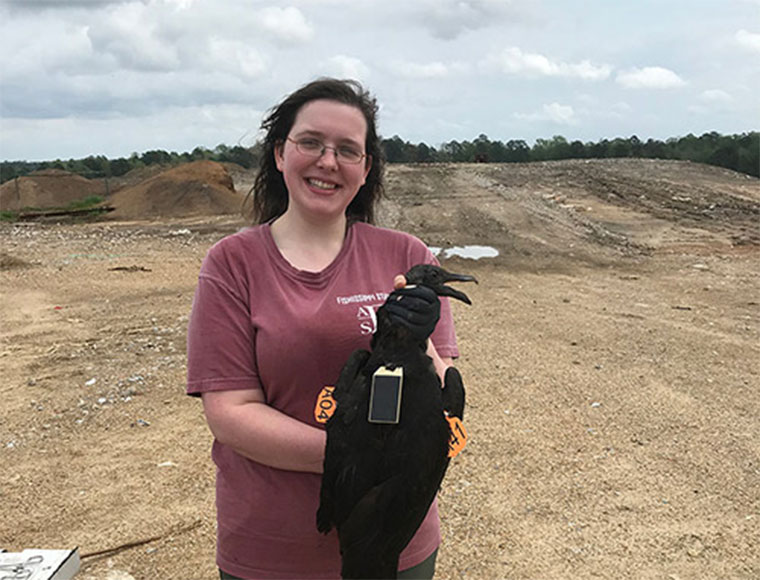 Scientists at Mississippi State are asking for citizen scientists to report sightings to help determine, among other things, the flight pattern of the mammoth bird.

Scott Rush, an associate professor in the wildlife, fisheries and aquaculture department and scientist in the MSU Forest and Wildlife Research Center, is spearheading the project. He and his team have begun the process of tagging vultures.

'We're hoping to get a better understanding of the movement of these birds. We want to know how site-faithful they are, how the seasons affect their movement and how many individual birds are there," Rush said.

Over the years, vultures have inflicted a toll on military and civilian aircraft. Navy student pilots at Naval Air Station (NAS) Meridian encounter the birds on a nearly daily basis, making landing, taking off or any low-level flying a dangerous challenge. Moreover, it appears the scavenging bird population is steadily increasing. NAS Meridian sought to mitigate the hazard with research from Mississippi State University and technical and financial assistance, in the form of a proposed grant, from the Office of the Secretary of Defense, Office of Economic Adjustment (OEA) to further study. NAS Meridian also asked the Meridian Airport Authority to apply for the proposed OEA grant based on the Authority's extensive record of success with grants.

In order to gain a better understanding of the bird's movements, the study relies on the reports of citizens who spot the vultures. If grant funding is secured, trackers will be placed on the vultures that give researchers a better understanding of not only the ground locations but also, among other things, the birds' flight pattern relative to the flight routes that Navy, Air Force, civilian and commercial pilots use.

"The study will hopefully help us find a peaceful solution, but ultimately it comes down to finding an effective mitigation strategy for the vultures, the military and other civilian aircrafts that might be in the area before somebody gets badly hurt," Rush said.

Scott Spencer, project manager for the Office of Economic Adjustment is hopeful for the same end-result for the study.

"We're hoping for recommendations that provide better land-use guidance, like where best to locate waste transfer facilities or the best management practices for other activities that attract vultures, such as agriculture or fish farms," Spencer said.

Should the proposed grant for more extensive trackers be approved, the recommendations of the study would assist not only Mississippi's military facilities, but also for the broader-reaching community of people whose livelihoods are affected by vultures. This includes farmers, poultry operators, aquaculture farmers, urban planners, waste managers and others, all of whom have the opportunity to contribute to the effort by contacting Rush with vulture sighting information.

"Our observations and implementation of corrective measures is limited to a five-mile radius of the airport. We need citizen scientists to help us determine where vultures are located so we can understand the nature of their home range," Spencer said.

To report a sighting, call or email Scott Rush at 662-325-0762 or scott.rush@msstate.edu. Please include the date, location and tag number of sighted vultures.