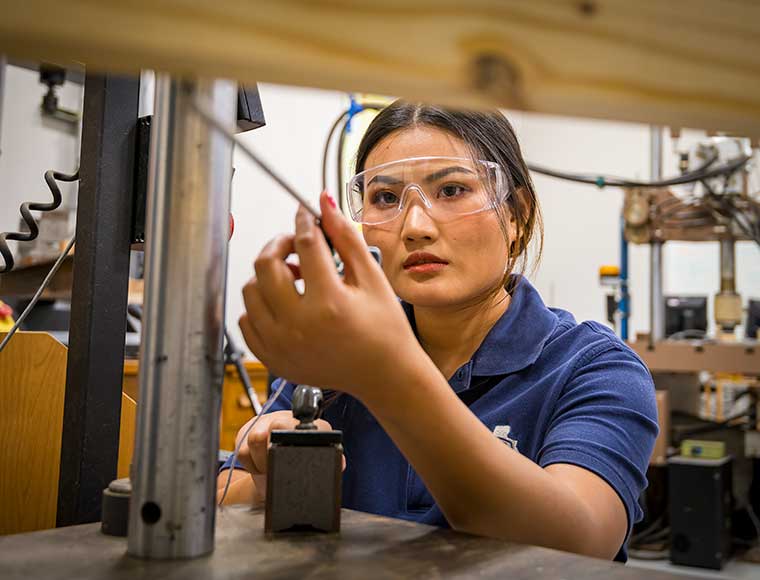 It is estimated that the average single-family home in the U.S. includes 16,000 board feet of lumber for framing. Architects and engineers select grades and sizes of lumber for various components in construction of housing and buildings based on design values.

In 2013, afer several years of testing and reassessment, the design values for southern pine dimension lumber were adjusted. This change impacted the utility value of several lumber grades and sizes, which in turn afects the value of pine logs on timberland in general.

When a statistician from the USDA Forest Products Laboratory (FPL) realized some of the models in the standards did not fit actual graded lumber data very well, FPL began cooperating with scientists in the Forest and Wildlife Research Center to help determine if a better model was available.

Dr. Frank Owens, a sustainable bioproducts assistant professor, and doctoral student Guangmei Anderson, began working on a project to evaluate various statistical models to determine if, perhaps, there was a better model for lumber standards.

Design values are strength-related values that appear in the back of lumber grading rule books. Engineers use them to help determine which grades, sizes, and quantities of lumber are needed to safely carry structural loads.

In general, the process of developing design values produces conservative (that is very safe) numbers and wood-frame building techniques use repetitive or redundant members.

"The existing models in the standards may lead to overly conservative conclusions about how well graded southern pine lumber can perform," Owens said. "Ultimately this costs Mississippi landowners and devalues pine lumber."

According to Owens, a lot has changed since the statistical models were developed.

"Our ability to compute and try on different models with our data has advanced significantly since the 60s, 70s, and 80s, when the sampling and statistical methods were evolving into the kinds we use today," Owens said.

Plus, the data Owens and Anderson are collecting is a little different than those used to develop the previous models.

The team has tested strength and stifness of 2,000 specimens of mill-run 2x4 kiln dried sofwood lumber from six U.S. sawmills. They have tested southern yellow pine from four Mississippi mills, and red pine and spruce from two northern mills.

The scientists are now analyzing how the strength and stifness values are distributed statistically, how they relate to each other, and how they compare to current models in the standard.

"We have affirmed that the current models in the standards are not accurate and our testing has suggested that better models exist," Owens said. "While the research is on-going, we are optimistic that we can develop improved models for mechanical properties of graded lumber populations that will more accurately refect how lumber actually performs."