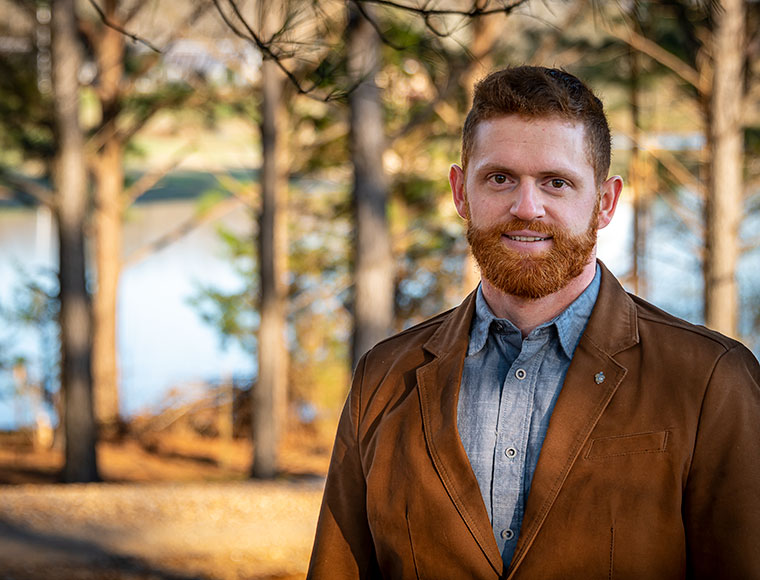 At thirteen, selling drinks up and down the stands of Davis Wade Stadium, a seed was planted in Jonathan Stoll. Now, years later, Stoll has returned to Mississippi State to reap the harvest as forest supervisor.

Stoll, a 2013 forestry graduate from the outskirts of Starkville, was hired to the position in July of 2019, after having worked as a consulting forester in Louisiana before returning to Mississippi to work for a timber company.

"In one facet or another, I've been practicing forestry ever since I graduated," Stoll shared.

There are indeed many facets to forestry, and Stoll takes on the responsibility of nearly all of them in his new role as forest supervisor overseeing the day-to-day operations of MSU's Bulldog Forest. Stoll's primary responsibility is overseeing the care, cultivation, upkeep, and rotation of the forest and timberland that make up the Bulldog Forest, which includes approximately 30,000 acres across the state. Stoll said that successfully managing so many moving parts across such a vast acreage requires a new tactic every day and in every location.

"I'm doing something different every day," Stoll said. "I might be measuring trees today, riding a tractor tomorrow, managing a spreadsheet the day after, or preparing to conduct a prescribed burn next week. It's a revolving door of forest management."

Still, Stoll assures that the undertaking is a team effort. He leads his team at forest operations, directing them to the best course of action for the forest's particular need, and should the time arise that he is stumped, he calls for help.

"MSU is home to some of the South's leading experts in natural resources, agriculture, and related sciences, and I try to utilize them whenever necessary. I can easily call on a geologist, an entomologist, a wildlife biologist, and more, and everyone is always happy to lend a hand," Stoll said.

Keeping the Bulldog Forest healthy is integral both to Stoll's role as forest supervisor and to ensuring that it remains an invaluable asset to the university and Mississippi as a whole. While the timber that is harvested from within it goes directly back into the university, Stoll is committed to ensuring that the timber is harvested in a sustainable way such that more trees are planted than cut and therefore, more opportunity offered to a future Mississippi.

"I like knowing that I'm doing something to sustain the economy of Mississippi and the health of Mississippi's forests," Stoll said.

The most intensively managed 8,000 acres is the John W. Starr Memorial Forest, located just twenty miles from Starkville's campus, making it an ideal resource as a living laboratory for research and experiential learning.

"There are plenty of benefits to having the forest so close to campus, but the largest advantage for students is the opportunity to learn and conduct research in that setting. Students can go into the Bulldog Forest, grab a handful of pine needles, feel bark in their hands or dirt under their fingernails, see the insects in the mud, and more. That experience of living what they just learned in the classroom helps solidify the knowledge better than anything else," Stoll said.

Through the years, the Bulldog Forest has seen a sweeping variety of studies done, from spacing studies in pine stands, to hardwood research, to hydrology, to mass mortality studies that are garnering national attention.

"The forest studies are scalable, which is what is really great about it. A tree may represent a single data point, but we're planting millions and millions of trees in Mississippi each year. We're able to get a better grasp on more broadly applicable management practices because the forest is just so big," Stoll said.

With studies conducted right here in Starkville being applied worldwide, it's impressive to think that the continued success of the Bulldog Forest began with Jonathan Stoll selling drinks at the stadium all those years ago.

"I'm still new to the job, but I've known foresters who planted seedlings on their first day and, thirty years later, were able to go back and harvest them. That's what I'm hoping to do here, in all aspects of the job," Stoll said.