Where Have All the Bucks Gone? By: Vanessa Beeson 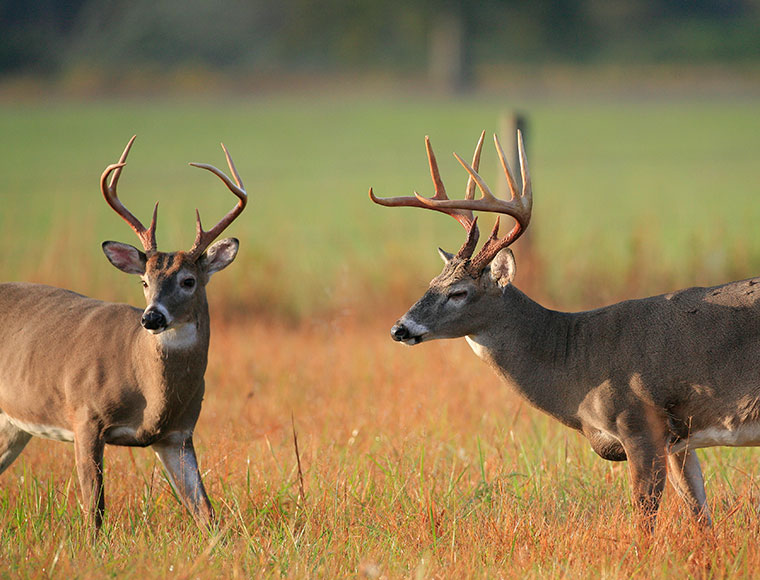 It's finally here and it feels like you've waited all year for this. The trail cams have been set out for months. You've been watching. You think you know who's who. There's one in particular. A ten-point buck you've seen on the camera a half a dozen times at least. It's a perfect predawn Saturday with a calm breeze. You head to the blind. You wait and wait and wonder where has the buck gone?

This scenario happens more often than many hunters care to admit. They see nice-sized bucks on trail cameras around their hunting club or property and then once hunting season commences, it's like the prized bucks have vanished into thin air. That's why researchers in the MSU Forest and Wildlife Research Center partnered with the Mississippi Department of Wildlife, Fisheries and Parks to study both buck and hunter locations in order to determine things like behavior and geographic overlap.

Dr. Bronson Strickland, the St. John Family Professor of Wildlife Management in the Department of Wildlife, Fisheries and Aquaculture and researcher in the Forest and Wildlife Research Center, said the team sought to answer questions that perplex hunters again and again.

"Hunters were primarily interested in learning whether or not big bucks moved out of range during hunting season and whether or not hunting impacted the time of day bucks were on the move," Strickland said.

The team used GPS collars to track bucks intensively for two years. They studied approximately 50 bucks collecting their location every 15 minutes during hunting season, which runs from October 1 through January 31, and every few hours during the rest of the year.

The study area encompassed 60,000 acres of diverse habitat along the Big Black River in Madison and Yazoo counties in Mississippi.

The team determined that in some cases the hunters were correct in thinking that the large buck they'd set their sights on had moved to another home range.

"When it comes to home range, we learned that bucks fell into one of three categories," Strickland explained. "One third of the bucks were home bodies who didn't leave their home range while another third established one home range before moving to an entirely different home range later on. The rest were somewhere on the scale between these two extremes."

Another hunter hunch was that bucks tended to move at night or during the middle of the day once hunting season commenced. Strickland says the data did not support this tidbit of conventional wisdom.

"We did not detect a temporal shift in buck movement during hunting season. The bucks still tended to move the most during sunrise and sunset with very little movement during the middle of the day or night," Strickland said.

Strickland said a unique aspect of this particular study was that in addition to collecting data on the bucks, the team asked hunters to self-report hunting data in the area. Hunters were able to record hunt start and finish time, hunt location, and deer harvested on the MSU Deer Lab app. That way researchers were able to truly investigate how buck behavior might change in the face of hunting pressure. More than 100 area hunters uploaded hunting data.

On that front, researchers found bucks in heavily hunted areas did tend to have smaller home ranges. They also determined that bucks tended to avoid areas frequently visited by hunters.

"This data tells us that over time bucks may learn to avoid areas with high traffic from humans. Instead of returning to the same stand every Saturday, it might be wiser for a hunter to wait for ideal conditions to hunt a particular area and then give that area a rest for a few weeks after the hunt."

Next steps include analyzing the data to better determine how bucks respond to hunting pressure and delving into details about what kind of vegetation and habitat bucks seek when selecting a home range. Wildlife, fisheries and aquaculture master's student Ashley Jones will investigate hunting pressure while wildlife, fisheries and aquaculture master's student Colby Henderson will focus on habitat.

"This information should help us determine ways land managers can manage—and not manage—for deer depending on their ultimate goals. The study also provides insight into certain questions hunters have wanted answered for years and will ultimately help them learn new ways to make the most out of their time in the blind."

Collaborators include Drs. Stephen Demarais and Garrett Street. This work is funded through the Mississippi Department of Wildlife, Fisheries and Parks; the U.S. Forest Service; and the MSU Forest and Wildlife Research Center.