A New Face in Bird Research By: Joshua Rapp Learn 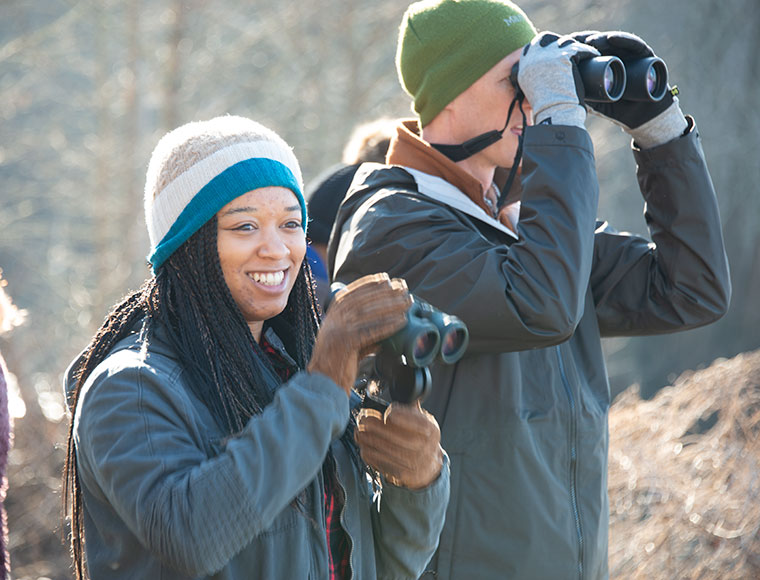 Murry Burgess was alone, reaching her hand into a swallow's nest from the top of a 16-foot ladder in a barn in rural North Carolina, when she realized something didn't seem right. Rather than the familiar texture of small chicks, she felt something smooth, slick and scaly.

"There is a huge black rat snake just sitting in the nest, chilling, after eating my research," Burgess said.

Eastern rat snakes (Pantherophis alleghaniensis) aren't venomous, but this one still presented a problem —aside from preying on her research subjects. Barn swallow (Hirundo rustica) nests can be fragile, and extracting a big snake without pulling the nest off the ceiling added an extra challenge. Storms had already knocked down some of the nests she was monitoring as part of her master's work at North Carolina State University, where she was researching the effects of artificial night light on swallow stress levels. And since social distancing measures due to the ongoing COVID-19 pandemic were in place, her only work companion was "the worst field technician ever"—a pit bull mix that ran off with the pencils and tools she dropped.

Burgess, an Associate Wildlife Biologist®, put on a pair of work gloves, stepped back up on the wobbly ladder and pulled out the snake as it tried to strike her, her dog barking below. "It was definitely a balancing act," she said. Once back on solid ground, she released the snake down a country road away from her research and got back to work.

"Her fortitude to stay on track and her dedication are tremendous," said Caren Cooper, an associate professor at North Carolina State University and Burgess's master's adviser. Burgess's efforts to get the project off the ground in the midst of the coronavirus pandemic showcased her leadership, Cooper said. "She really persevered through something that would have made some grad students crumble."

When Burgess was applying for her master's in N.C. State's Leadership in Public Science, she impressed Cooper with her undergraduate field experience. But the program also seeks candidates with a strong community outreach component. For most, that involves citizen science. But Burgess's resume had something different. She had written a children's book, Why Wolves Howl, an achievement that program faculty members felt could help get a more diverse audience involved in wildlife from their earliest years.

"She's going to be a super well-rounded scientist with her communication skills and with her science skills," Cooper said.

Carice Godbey, a friend who studied with Burgess at Mississippi State University as an undergraduate and is now pursuing her master's at Arkansas Tech University, is still enthralled by what Burgess had managed to achieve in wildlife-related publication and communication. Even before she had her bachelor's degree, Burgess had contributed to a study in the Encyclopedia of Animal Cognition and Behavior on how climate and human activities affect the navigation of dugongs (Dugong dugon) and manatees (Trichechus spp.) "You don't just listen to Murry when she talks. You really want to hear what she's saying," Godbey said.

Burgess' path has had extra obstacles. Being Black can add challenges to conducting fieldwork, or even just enjoying recreational wildlife activities like birding, she found. One afternoon, Burgess had to cut a birding trip short after she noticed a police car slowly tailing her while she focused on the treetops with her binoculars. And that's not the only time she's been tailed by cars while in the field.

"It's always [meant] having to be extra careful, especially when I'm by myself," she said. "I try not to let it get to me."

But Burgess hopes to be part of the movement for change. "I'm a young, Black professional and I know a few others," she said. "Hopefully, in the next 10 years we'll see the face of wildlife shift a little bit."

Increasing visible diversity in the wildlife profession is also important, because it normalizes the presence of Black people in the field, she said. That way racist incidents like Black birder Christian Cooper's confrontation with a woman walking her dog in Central Park are less common in the future. That incident was the catalyst for #BlackBirdersWeek, a recognition of Black nature enthusiasts, which drew more attention to Black bird hobbyists and wildlife professionals.

"It's important for the safety of people already out there," Burgess said. "We are out there doing the same thing white scientists are doing, and we should be treated with equality."

In addition to increasing diversity in the field, Burgess also hopes to make scientific contributions to urban ecology. While research has been conducted on how artificial night light can affect the eating habits or reproduction of birds, Burgess' work on barn swallows is uncovering more about how lights affect their metabolic system and their growth.

"I'm looking at how light stresses them, and how that stress affects the way they metabolize their nutrients," Burgess said. The barn swallows she counts at night are all exposed to different light treatments—some with Christmas lights overhead and some without. Based on her work so far, she believes barn swallow chicks that grow up around artificial light have higher blood sugar levels and slower growth trajectories than birds fledged in darker conditions.

Burgess wants to add to the larger body of knowledge about the negative effects of light pollution in an effort to one day influence decisionmakers to decrease the use of artificial light, which would benefit a number of species.

While she's hooked on birds these days, Burgess' earliest wildlife experiences involved watching Steve Irwin's The Crocodile Hunter and mimicking the late conservationist's bold approach to dangerous animals. Instead of sneaking up on large crocodiles to tackle, she would chase the green anoles (Anolis carolinensis) and green tree frogs (Hyla cinerea) in her yard in Jacksonville, Florida.

She carried this love of reptiles into her undergraduate studies at Mississippi State University for a Wildlife, Fisheries and Aquaculture degree concentrating on wildlife sciences. Some of her best times were on naturalist trips with colleagues in TWS' student chapter at Mississippi State— many of whom inspired her love for wildlife.

Godbey was one of them, but the way she tells it, Burgess inspired her— not the other way around. She said she gravitated towards Burgess early on in part because Burgess made working hard look effortless, including as an officer in the student chapter.

"She was one of the best treasurers we've ever had," Godbey said.

Burgess credits professor and chapter coordinator Chris Ayers for inspiring her and sparking her love of birds that she carried into her master's program.

"He was just awesome. He knew so much about birds and mammals. He had all these study specimens. He really just cultivated my interest in learning and studying different species," Burgess said.

She hopes her focus on urban ecology may have implications beyond birds—and that it can help get people in cities more interested in wildlife.

"You don't have to be in a rural area or go to a fancy park," she said. "There's wildlife in your backyard and that wildlife is valuable."

This article was originally published in The Wildlife Professional, an exclusive benefit for members of The Wildlife Society. Printed with permission of The Wildlife Society. Additional distribution, republishing in part or whole, posting on a different website, or using for commercial purposes is protected under copyright laws and requires additional permission from the publisher and original author(s). Learn about more membership benefits and become a member at wildlife.org/join.