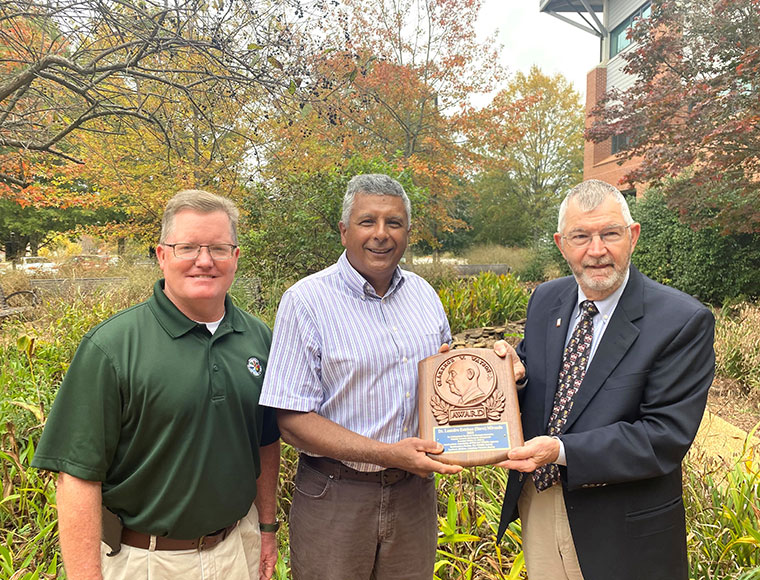 Miranda has been a prominent freshwater fisheries biologist for the USGS Mississippi Cooperative Fish and Wildlife Research Unit since 1986.The award is the highest honor given by the Association and is presented in conjunction with the Southern Division of the American Fisheries Society and the Southeastern Section of the Wildlife Society.

"Dr. Steve Miranda is one of the most accomplished freshwater fishery biologists in the world," said SEAFWA President Paul Johansen. "His research program over the past 30-plus years has addressed critical challenges facing inland fisheries management, including habitat loss in rivers and reservoirs, harvest management strategies for sustainable fisheries and social aspects of fisheries management."

As the invited keynote speaker at the 4th international Reservoir Symposium in 2007, Miranda is recognized as one of the most accomplished reservoir research biologists in the world. His promotion of managing reservoirs as impounded rivers, including the importance of floodplain management for fisheries, yielded a paradigm shift in the scientific and fisheries management community.

He has broadened his research beyond reservoirs to include river-influenced oxbow lakes, little studies systems with significant conservation and recreational values in the Southeastern U.S. and worldwide. In addition to his own research, Miranda has mentored more than 40 graduate students who have gone on to influence fishery management as agency biologists, environmental scientists and academics.

"Few fisheries researchers have had a deeper or broader impact on practical, on-the-ground fisheries management in the Southeastern U.S. than Dr. Miranda," said Larry Pugh, Director of Technical Programs, Mississippi Department of Wildlife, Fisheries, and Parks. "The concepts and techniques that he has pioneered are used by every fisheries manager in state and federal agencies in the Southeastern United States."

The Southeastern Association of Fish and Wildlife Agencies (SEAFWA) is an organization whose members are the state agencies with primary responsibility for management and protection of the fish and wildlife resources in 15 states, Puerto Rico and the United States Virgin Islands. Member states are Alabama, Arkansas, Florida, Georgia, Kentucky, Louisiana, Mississippi, Missouri, North Carolina, Oklahoma, South Carolina, Tennessee, Texas, Virginia and West Virginia.