Plant-based Chemicals of the Future By: Karen Brasher 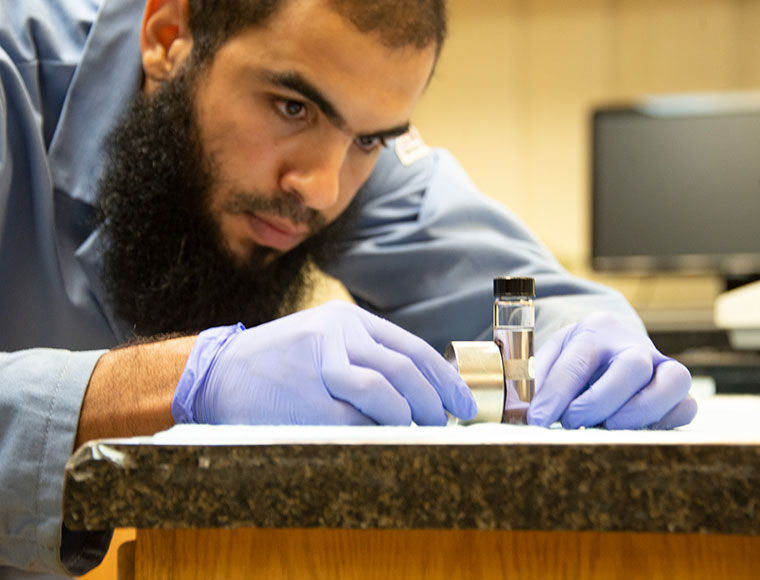 Fossil fuels are decayed plants and animals that have been converted to oil, coal, and natural gas through years of exposure to heat and pressure in the earth's crust. Petroleum, a common fossil fuel, is used to create over 6,000 different products.

There are issues related to the extended use of petroleum including environmental pollution and global warming. Add to this the diminishing reserves of fossil fuels. So, how do we replace this important chemical used in pharmaceuticals, solvents, fertilizers, pesticides, and plastics?

Dr. El Barbary Hassan, a chemist in the Department of Sustainable Bioproducts, and numerous other scientists are looking for a solution, which begins and ends with one of the principal components of fossil fuel creation...trees and woody plants.

Wood is a natural composite material consisting of different polymers such cellulose, hemicellulose and lignin. Cellulose is the substance that makes up most of a plant's cell walls and it is the most abundant natural material on earth.

"Cellulose is traditionally used to make paper, but it is currently considered as one of the major potential sources for production of fuels and industrial chemicals," Hassan said. "Converting cellulose to chemicals and fuels feedstock requires a catalyst, similar to the catalyst of time and pressure on plants and animals that created fossil fuels in the earth."

Synthesizing a catalyst that will render high yields of desirable chemicals at an affordable cost is a critical component to using plant-based biomass. Catalyst or catalytic systems can be metallic or non-metallic and are generally considered a one-use type system. Hassan and his team are working on developing an effective and inexpensive catalytic process with magnetic properties.

"We are developing a cost-effective nano catalytic system with magnetic properties which allows for the recovery of the catalyst so that it can be used repeatedly," Hassan said. "These magnetic nano catalysts have shown good stability and easy separation from the desired chemical compounds that we are producing compared to other catalysts used."

The scientists set out to convert cellulose to hydroxymeth-ylfurfurlal, or HMF. This organic compound is a carbon-neutral feedstock used in the production of fuels and chemicals.

"HMF is an excellent molecule or building block from which chemicals and products can be made," Hassan said. "One of the most important oxidized derivatives of HMF is 2,5-furandicarboxylic acid, or FDCA, which is a building block for production of sustainable polymeric materials."

FDCA is a bio-based and environmentally-friendly substitute for terephthalic acid that is produced from petroleum crude oil. In the plastic industry, FDCA is widely used for the production of polyethylene terephthalate bottles and films.

HMF can also be converted to 2,5-Dihydroxymethylfuran, or DHMF, which is an important component in the production of resins, fibers, foams, drugs, and polymers, among other products.

"Our goal is to develop chemical building blocks that can be combined and used to ultimately replace fossil fuels used in the production of numerous products which currently rely on petroleum," Hassan said. "Developing a magnetic catalyst that can be reused will save costs while also allowing us to perfect the chemicals of the future."

While the research is ongoing, Hassan's team has developed a catalyst that has been used repeatedly without losing any of the necessary properties needed to turn cellulose into chemicals. The catalyst has also demonstrated high yields in the production of important chemical building blocks.