Covering the Basics: Understanding the Ideal Habitat for Wild Game By: Taylor Vollin 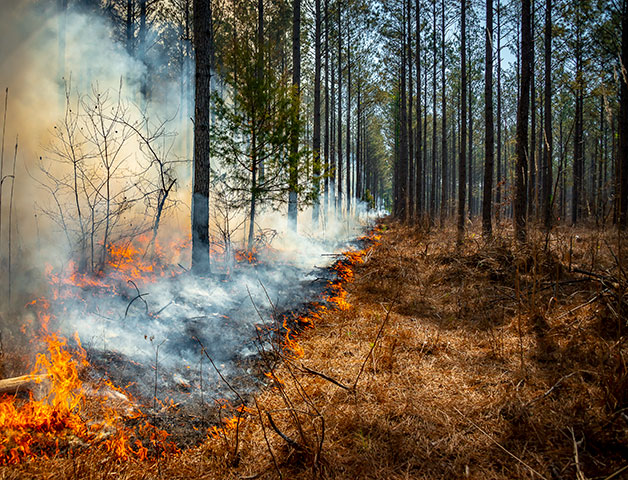 There is a common misconception in the hunting world that plentiful food supply equals frequent visits by white-tailed deer or wild turkey to a specific habitat. Hunters plant food plots, place spin feeders, yet don't see the wildlife activity for which they had planned. What is missing from the equation is an equally important factor…cover.

Much like an animal needs food and water, they also need adequate shelter. That is why researchers in the MSU Forest and Wildlife Research Center set out to study how vegetation characteristics including food availability and cover affect intensity of habitat use by animals.

Dr. Bronson Strickland, the St. John Family Professor of Wildlife Management in the Department of Wildlife, Fisheries and Aquaculture and researcher in the Forest and Wildlife Research Center, said the team sought to understand the relationship between food and cover and how to teach people using this new information.

"Our big picture question was not only what is the relationship, but how can we use that to teach people?" Strickland said. "For me, the most important thing is that landowners have options."

The study took place at the Andrews Forestry and Wildlife Laboratory, a 500-acre property that is part of the MSU Bulldog Forest and provided a unique opportunity to examine this research question because the property provides a variety of forest management scenarios that yield various levels of wildlife food and cover habitats. Prior to the experiment, the forest was thinned at differing levels with combinations of herbicide and prescribed fire treatments that provided a range of habitat composition.

As a result, there were sites exclusively offering cover, some exclusively offering food, some providing both, and some providing neither. Eighty camera stations were placed, one camera for every five to six acres, that ran continuously over a year. The cameras recorded when an animal entered the area and the vegetation characteristics in proximity.

The team was initially surprised to find that portions of the property offering both food and cover saw the most animal abundance.

"Most people think it's all about food and that you have to have food since it's a basic requirement for life," Strickland said. "So, I went into this study with the assumption that we were going to see more animals in the areas that were exclusively food."

In hindsight, however, Strickland noted that the outcomes are understandable as land providing refuge and ease of access to food provide basic necessities for wildlife.

"The places that provided food and cover simultaneously is where we saw a true difference in wildlife abundance," Strickland said. "Those places that could provide refuge without wildlife having to go great distances, exposing themselves to predators, are where we found them."

Dr. Garrett Street, assistant professor in the Department of Wildlife, Fisheries and Aquaculture, found himself not as the cameraman but as the one interpreting and quantifying the evidence. Street was the brain behind taking the data collected from the cameras and analyzing it.

"My portion of the research was to detect wildlife in the photographs, compile and analyze the data, and then use a mathematical equation to determine probability of wildlife occurrence," Street said.

The findings open the door for a conversation with hunters and landowners on best practices to improve wildlife response. Most importantly, the importance of both food and cover in a habitat is evident.

"Animals are more than just eating machines, you have to think about them through a whole system, whole animal perspective," Street said. "This gives us leverage and evidence to speak to hunters about what they want out of their habitats. If your goal is to have land that is good for hunting and providing these animals with what they need, give them the cover."