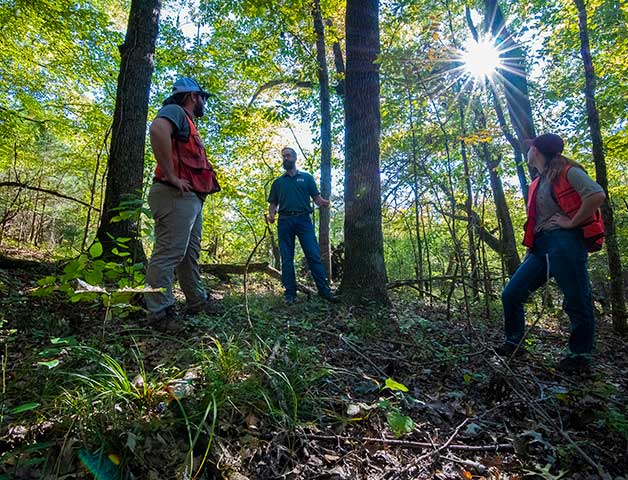 Trees are all around us, giving off oxygen, storing carbon, and giving life and shelter to wildlife. But what would a world without trees look like? Species like the American chestnut and elm have nearly disappeared due to the introduction of invasive pests and fungus. Ash species find themselves in a similar position with the emerald ash borer. That's why researchers are finding ways to aid in control of the insect and plan for long-term restoration efforts when an invasion does take place.

Native to Asia, the emerald ash borer eats into the bark of ash species, making channels and laying eggs in between the wood and the bark.

"In a sense, the insect strangles the tree, so it cannot move food and water as readily through its system," said Dr. Joshua Granger, an assistant professor in the MSU Department of Forestry.

There is almost a 100 percent mortality rate within four to six years for ash populations once the insect invades.

While scientists do not know how to stop the pest from killing ash trees, they have learned that diversifying stands provides forest managers with control and restoration efforts. The researchers sought to understand what might replace the ash once it is gone.

Granger said he wanted to bring attention to the risk of losing some minor ash species, especially ones in Mississippi. The hypothesis of the research is that these minor ash trees have a niche specific habitat—an area or position that is exactly suitable for a small group of trees of the same type.

"I suspected that these niche specific habitats are highly susceptible to emerald ash borer, and with that, their community is at a greater risk of facing disturbance and being more severely impacted," Granger said.

The team used the Shannon-Wiener diversity index method which characterizes species diversity in a given community to analyze data from the Forest Inventory and Analysis program. In this case, samples were taken from 37 states supporting at least one of the six native ash species found in the eastern United States. The team found that plots with white, green, and blue ash had a higher tree species diversity than those with black, Carolina, or pumpkin ash.

Granger said the research demonstrates just how niche specific these species are.

"The research clearly shows that black, Carolina, or pumpkin ash don't have large ranges. They are very niche specific so there are not a lot of native alternatives for replacing them," Granger said.

Though emerald ash borer has not yet made its way to Mississippi, it can be found in Alabama, Tennessee, and Louisiana, meaning it is only a matter of time before it reaches the Magnolia State. Containing five of the six ash species, Granger said Mississippi will be at great risk when the time comes.

"Ash trees are common in urban settings as they are fast growers and provide a nice canopy," Granger said. "When the emerald ash borer does arrive in the state, it will impact our communities severely, including the MSU campus which has a large population of ash trees."

Treatments to prevent the insects from inhabiting the trees are possible, but they are expensive. Granger said the best method is to prepare ahead of time and incorporate other species into forested stands.

"The big thing to do is to prepare ahead of time. Look at ways that you can incorporate other native or valued species into the system," Granger said. "You have to look to alternatives to plant so that we don't have 100 percent mortality for the species."

A partnership that began in Tennessee and diverged both north and south, Granger teamed with Dr. John Zobel, his former adviser while he was a doctoral student at the University of Tennessee. Zobel is now an assistant professor in the University of Minnesota's Department of Forest Resources. Zobel extracted usable data to determine where the ash was and what could replace it by taking data from the Forest Inventory and Analysis program to calculate the Shannon-Wiener diversity index and an index of species evenness. Zobel said he was eager to work on such a crucial situation.

"It's a very interesting ecological question because this insect is such a huge factor in the future of forestry in that it may remove all of ash in a long-term, if not permanently," Zobel said. "That is huge in forestry to lose a species like that."

He continued, "The question is, they fill an ecological niche on the landscape, what's going to happen if what they are facilitating on the landscape goes away? It's just really interesting to me to get involved in this large-scale, catastrophic type of question."

Despite the tragic issue at hand, Zobel said the partnership with Granger and MSU was ideal, considering the friendship they have built over the years.

"What I love about the collaboration with Josh and continuing on other projects as we speak is that he asks really pertinent questions that will be relevant to managers and scientists for years to come," Zobel said. "He has a knack for asking a good question, I mine the data for answers, and we develop solutions together. It's just a very symbiotic partnership."