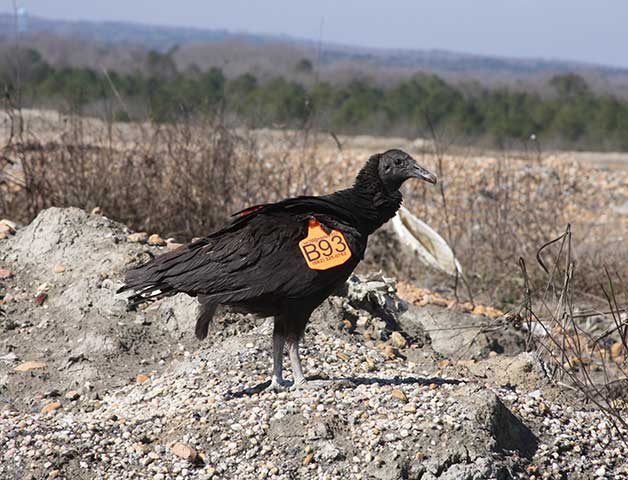 A Mississippi State-led study using "citizen science" is entering its second year of data collection that ultimately could yield solutions to vulture-aircraft collisions.

MSU College of Forest Resources Associate Professor Scott Rush said he expects to deliver scientific-based recommendations from the analysis to mitigate this human-wildlife conflict, a frequent challenge for military pilots who encounter the birds during take-off, landing or low-level flying. The study is a partnership with the Naval Air Station in Meridian and the Columbus Air Force Base, explained the researcher in the Department of Wildlife, Fisheries and Aquaculture.

Relying on reports of citizens who visually spot tagged vultures, Rush's data collection was temporarily stifled during the pandemic which impacted time spent by local residents outside the home. Now calling the citizen feedback "crucial" to the project, the MSU scientist needs "more citizens to contact us if they spot a tagged vulture."

To report a sighting, call or email Rush at 662-325-0762 or at scott.rush@msstate.edu. Please include the date, time, location and tag number of sighted vultures. He said observers should report sightings even if they cannot read the tag number.

"If it's possible for the observer to report how many other vultures the observed tagged bird appeared with and their activity, such as feeding on roadkill, roosting, etc., that information is great, too," said Rush, who also does research as part of the MSU Forest and Wildlife Research Center.

Rush and his team have tagged more than 200 birds, both turkey and black vultures, in areas around Meridian and the Golden Triangle. He explained how the raptors have increasingly become a hazard.

"Over the years, we've seen an increase in collisions between aircraft and these birds, and it's of extra concern when a conflict involves a hazard to human life, as well as expensive military aircraft," Rush said.

"Most of the birds we've tagged have been captured in or around West Point. We have also tagged birds in Meridian. From information gained from tagged birds, we know some frequent areas as far northwest as Memphis, Tennessee, and as far east as Birmingham, Alabama, though most of them stay within 30 miles of West Point or Meridian," he said.

Jim Copeland, community planning and liaison at NAS Meridian, has been assisting with the project since its inception. He said the tagged birds are already yielding benefits.

"In one case, as the county debated whether or not a waste transfer station should be permitted in the area where many jets are on approach to NAS Meridian, the maps showed concentrations of vultures on three sides of the proposed station. Since such a station would act as a draw for the birds, the permit was not issued," he said.

Copeland said while the team has good data on vultures in Lauderdale County and Lowndes County there is a gap in data in the middle, west of Scooba.

"We know there are vultures there because we have hit them at Joe Williams Field in Preston. We need to know more about the birds, where they are from and where they're going. If we learn where they are and why they occupy that space, our jets can avoid them," he said.

NAS Meridian has supported Mississippi State's research financially through a grant from the U.S. offices of the Secretary of Defense and Economic Adjustment. Additional partners include Lauderdale County and the Meridian Regional Airport.