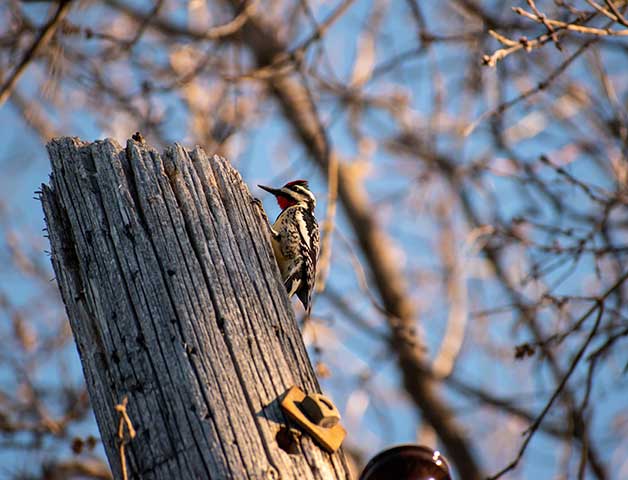 Power companies across the nation spend millions of dollars each year repairing and replacing utility poles damaged by woodpeckers. Researchers in the Forest and Wildlife Research Center are putting their heads together to develop a predictive map of where such damages will likely occur, giving power companies a proactive and cheaper way to head off damage before the pecking even begins.

The Tennessee Valley Authority keeps the lights on in a seven-state region, serving portions of Tennessee, Mississippi, Alabama, Georgia, Kentucky, North Carolina, and Virginia. Since TVA supplies electricity, if a pole snaps due to woodpecker damage there's a potential for bodily harm, fire or even local impact to the grid.

In order to better understand the scope of the problem, T VA contacted Dr. Scott Rush, an associate professor in the Department of Wildlife, Fisheries and Aquaculture, to design a unique map that would give them more information as to the locations and trends of woodpecker damage. Rush, the project's principal investigator, shared TVA's vision of the study.

"TVA is looking for a more efficient and effective way to understand the ecology of woodpeckers," Rush said. "That would allow them to be proactive in their maintenance, which is fiscally responsible because it's cheaper to prevent damage than it is to repair it."

Though woodpeckers undoubtedly damage utility poles, it's likely that they are only exacerbating an existing problem. Rush shared how the damage done by the woodpeckers is speeding up an inevitable process, which may be positioning the birds as an alert system.

"If a woodpecker is being drawn to a pole, there's likely already some structural damage to it. If a tree is rotten with fungi and insects, there's more incentive to drill there, so by getting an understanding of where they're creating damage, we can offer T VA the opportunity to detect trends in the ecologic data and take a proactive approach to the damage," Rush said.

As simple as the goal sounds, a modified species distribution map, such as the one TVA requested, requires an incredible amount of data to make a well-informed prediction.

Hannah Wright has been working on this study as her master's thesis and played an important role in the culmination of this map and its volume of data. Wright began by combing through various databases for statistics on the woodpecker population in a given area as well as the measure of many different environmental factors such as elevation and temperature. Wright also spent a great deal of time visiting the seven-state service area of TVA, gathering data in-person on numerous damaged utility poles.

Once the massive compilation of data was finished, it was then cross-referenced with information given by TVA of utility pole damage and replacement to establish trends among the locations and, hopefully, offer reasonable predictions as to what locations the woodpeckers might damage next. Wright shared how the species distribution map itself is special.

"Most of the time when species distribution maps are being utilized, it's for conservation purposes. That's not to say that this study is anti-conservation. The TVA doesn't ever want to hurt the woodpeckers, but they are causing a problem, and they need to know how to adapt to them in their power structure. It's been interesting applying this tool to a different context, one that's more concerned with a human-wildlife conflict," Wright said.

Though the model was requested for its predictive value, checking the accuracy of predictions in the present can prove difficult. With that in mind, Rush and Wright have organized the model such that it calibrates itself with 80 percent of the data it holds, then produces predictive outputs that the researchers can check against the remaining 20 percent of the actual data. The location outputs are units of about 180-square-feet, a narrow enough margin that maintenance workers at TVA would have only one or two utility poles to check within the area.

While the model is still undergoing minor adjustments before its presented to the TVA for implementation in the field, the researchers are hopeful about its future and its economic benefit to the Tennessee Valley Authority.

"If this model can save the TVA even 20 percent of what they pay to repair woodpecker damage annually, then that's a million dollars for the company that services nearly 10 million people in our neighborhoods," Wright said. "It's fulfilling to work on a project that impacts so many people."

This work was funded by the Tennessee Valley Authority, Alabama Ornithological Society, and the United States Geological Survey.