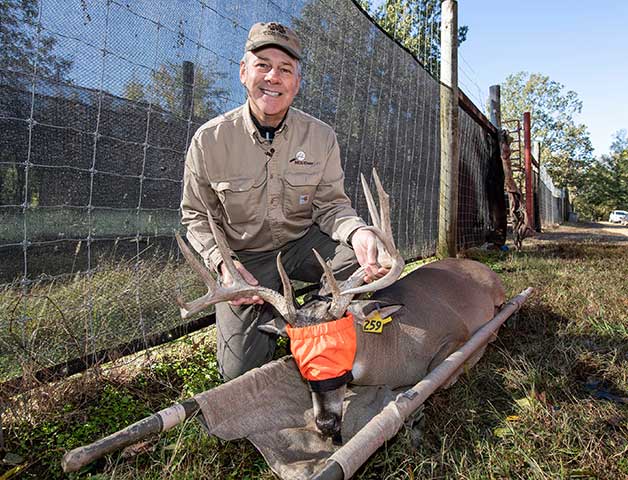 A Mississippi State professor in the College of Forest Resources is being recognized with a prestigious applied research award by the nation's premier wildlife science organization.

Professor Steve Demarais is the recipient of the Caesar Kleberg Award for Excellence in Applied Wildlife Research from The Wildlife Society. He will be honored at the group's annual conference held virtually November 1-5.

This Caesar Kleberg Wildlife Foundation award, endowed in 2007, distinguishes wildlife researchers whose body of work translates to real-world application of conservation and management.

Demarais, who also is MSU's Taylor Chair in Applied Big Game Research and Instruction, said the accolade is among the most meaningful of his career.

"Caesar Kleberg was a south Texas rancher who greatly valued research that had application for landowners. My entire research life I've always enjoyed doing work that matters to landowners, hunters and other deer biologists," Demarais said. "If I can talk about my research and see enthusiasm in the eyes of the stakeholders I serve, it makes the work fun and exciting."

In his 35-plus year career, Demarais has spearheaded research that now informs deer management at local, state and regional levels. His research efforts have established best management practices for deer habitat in pine timber tracts. His work has determined that smaller antler size in the lower coastal plain is attributed to nutrition instead of genetics, paving the way for habitat management initiatives to remedy the problem. In one landmark study, his work even redefined statewide policy.

"Our analysis of the state's antler restrictions and how they were impacting the harvest of bucks in Mississippi led the state to amend its harvest criteria. It was a clear case where we analyzed the effects of what was happening at the state level and identified issues, so changes could be made that improved deer management across Mississippi."

"This award was created for applied wildlife research, meaning it is research that has implications that will affect the management of the resource as well as hunters. Some of the big picture things Dr. Demarais has accomplished may seem commonplace now. When you think about it, research efforts that become widely adopted management practices indicate success," Strickland said.

He pointed out the importance of outreach efforts when it comes to research endeavors, a passion he shares with Demarais.

"Dr. Demarais strives to ensure research findings are extended to landowners, hunters, deer biologists and the general public. He seeks to reach the masses and that's how you cause change," Strickland said.

To assist in that effort, the team is active on social media with an engaged community of nearly 40,000 followers across multiple platforms. The deer university podcast they host is perhaps among the most popular, ranking No. 2 all time in the science and nature category as of December 2020 and attaining more than 87,000 new downloads across 39 countries last year alone.

In addition to the Kleberg award, Demarais and his team have been honored with other high-level wildlife ecology awards in recent years. In 2020, the MSU Deer Lab received the Boone and Crockett Club's Conservation and Stewardship Award, given annually by North America's oldest conservation club to an entity that demonstrates excellence in natural resource and stewardship conservation. In 2019, Demarais was recognized with MSU's top research honor, the Ralph E. Powe Research Excellence Award, and in 2018, he received the Deer Management Career Achievement Award from the Southeast Deer Study Group, one of the nation's premier organizations for deer biologists.

The MSU Deer Lab is a unit of the universitys Forest and Wildlife Research Center and Extension Service. Learn more at www.msudeer.msstate.edu. More can be found about the College of Forest Resources by visiting www.cfr.msstate.edu.