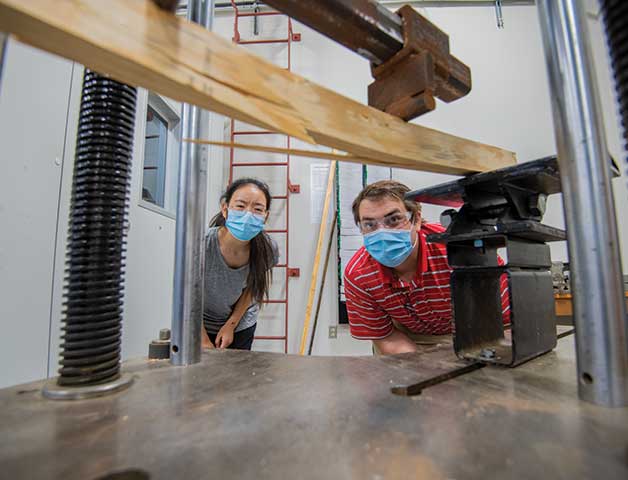 Picking a two-by-four from a lumber stack at your local home improvement store only takes a minute. How that piece arrived there, however, is part of a much larger story. Lumber is one of Mississippi's most important commodities and part of a $13.12 billion-dollar industry that employs over 61,000 people in Mississippi alone. Researchers in MSU's Forest and Wildlife Research Center hope to untangle how knots—remnants of where branches grew while the tree was alive—affect the stiffness and strength of this important commodity.

Dr. Rubin Shmulsky, professor and head of the Department of Sustainable Bioproducts, said commercial stakeholders asked MSU to study knots, which can be a strength-reducing characteristic in lumber that causes it to be downgraded.

"The larger the knot, the greater the amount of strength reduction. While visual grading factors take that into account, sometimes multiple knots appear in close proximity on a single piece of lumber. In those cases, none may be big enough to trigger a grade degradation, but collectively they may reduce board stiffness or strength," Shmulsky said.

The team set out to investigate the role multiple knots in close proximity play on affecting lumber stiffness and strength in an effort to increase the value of southern pine.

"We are trying to determine, to the closest degree possible, how stiff and strong every stick of lumber is, before it actually gets broken. The better and more reliably we can predict these strength and stiffness values, the more each piece of lumber—and in turn each acre of timberland—is ultimately worth," Shmulsky said.

In a series of studies spanning several years, Shmulsky along with Dr. Dan Seale, professor, and Dr. Jason Street, assistant professor, led a team of graduate students as they analyzed southern pine boards produced at a local Mississippi sawmill to determine if small clusters of knots impacted lumber stiffness and strength.

Street helped students select statistical models for the studies and taught them lumber testing standards and how to use the software to analyze data. He also reviewed the data and helped them understand the significance of the findings.

"A larger knot or multiple knots that are close together can cause lumber to rupture with less load when compared to lumber that has no knots," Street explained.

In a previous study, Marcela Barbosa, a former master's student, analyzed nearly 300 samples of southern yellow pine to determine the modulus of rupture, which measures strength, and modulus of elasticity, which measures stiffness, in lumber with multiple knots in close proximity. Barbosa found that the presence of multiple knots significantly affects the strength properties and established parameters to better predict both modulus of rupture and modulus of elasticity.

"In this study, we're using a finite element analysis to draw a 3-D model of southern yellow pine lumber and measure its strength rating. After that, we'll add knots to the model and look at how they affect strength," Street explained.

Street said the team is aiming for accuracy with attention to fine grain detail.

"We want to be as accurate as we can be to predict the strength rating, so we hope to use the entire knot volume. Right now mechanical testing just measures the surface area of a knot. We eventually want to recreate the knot's volume as it occurs throughout the entire piece of lumber," he said.

Street said the research's ultimate goal is to find a more accurate way of measuring the mechanical properties of lumber so that a more particular strength rating can be associated with each piece produced. He noted that the work might help researchers develop non-destructive evaluation technologies and provide a means to begin to assess the potential detrimental impacts on strength and stiffness that are caused by multiple knots in close proximity.

"Some pieces of lumber may be given a lower grade than what they actually are because of a certain feature. If lumber can be graded more accurately, in respect to depicting the actual strength of the lumber, a sawmill could receive more money for the lumber cut from stronger logs. In turn, the value of timberland can potentially increase," he said.

"Also, by knowing how these factors interrelate, one can envision that forest management practices could be amended slightly to avoid producing trees with multiple branches in close proximity— to the extent possible or practical," he added.

This research was funded by the Forest and Wildlife Research Center and the USDA Forest Service Forest Products Laboratory in Madison, Wisconsin.