A Bird on the Water is Worth Two to the Farmer By: Reagan Poston 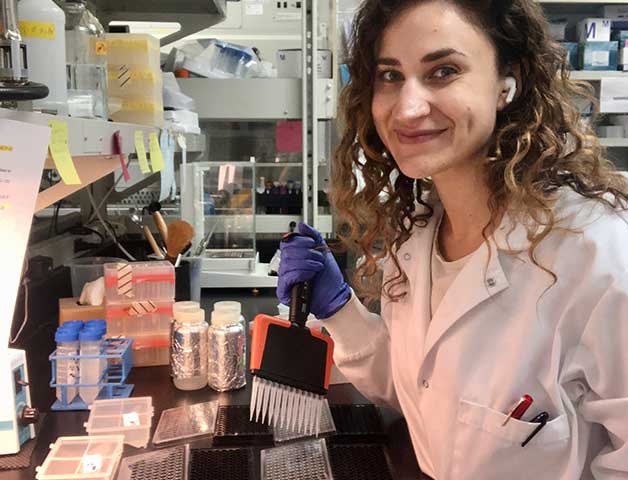 From the arid fields of New Mexico to the winter-flooded rice fields of the Mississippi Delta, Alexandra Firth has developed a passion at the intersection of agriculture and soil conservation.

After graduating with a degree in ecology from Humboldt State in Northern California, the Phoenix native's career as a biological technician took her all over the U.S. and briefly to Europe. It was while working on an organic farm in New Mexico, however, that Firth became interested in how agriculture systems can support the environment and eventually decided to pursue a master's degree in wildlife, fisheries and aquaculture at Mississippi State, which she earned in 2018.

"I witnessed agriculture's impact on natural systems in my travels as a biological technician, but working on the farm in New Mexico is where I really became interested in how agriculture and natural systems affect each other. At Mississippi State, I've been able to put those interests to practice," Firth said.

Her thesis research focused on how agriculture can mutually benefit the farmer and the environment. She designed a study that looked at the extent to which natural resources and agronomic systems are affected by waterfowl in winter-flooded LEISA rice fields.

To quantify these effects, Firth and her research team modeled their case study after a producer in the Mississippi Delta who was employing a LEISA method of management. LEISA is a collection of sustainable management practices that adapts the system for a given environment, optimizes the resources already available, and minimizes the changes to the natural environment. The combination of these management practices created habitats for wintering waterfowl, and after a decade of doing this, the producer was reporting improvements in soil health and a reduction in needed fertilizer.

Firth's case study aimed to determine the extent to which the birds were affecting soil health in LEISA fields that had been winter-flooded with rainwater and had not been tilled following harvest. They compared avian populations with that of flooded and non-flooded fields not managed with LEISA practices and consistently saw higher populations in flooded LEISA fields. Though game cameras on-site captured photos of thousands of birds in a single winter flooded LEISA field, the true measure of the impact of abundant waterfowl is reflected in the soil sampling. Firth, focusing on soil microbiology in her pursuit of a Ph.D., shared the impact of these management practices on the soil.

"Hundreds of birds all occupying the same space leave significant amounts of droppings behind and those droppings are a rich source of organic matter, microbial activity, and nutrients. The fecal matter is incorporated into the soil and has the potential to be used as fertilizer for the following crop. The LEISA flooded fields had more nitrogen, carbon, and microbial diversity and activity, indicating that this type of production system and associated bird use improve soil health," Firth said.

Given that LEISA is a collection of management practices, the benefits cannot be solely attributed to the birds, but Firth shared how improved soil health can benefit the larger environment in addition to the individual producer.

"To the producer, soil health is obviously important for adequate growing conditions, but improving soil health is one of the biggest things we can do for the environment as well. Soil can sequester carbon, potentially offsetting the effects of climate change. Healthy soil also holds onto nutrients more effectively, lowering fertilizer input needs and nutrient run of into the water," Firth said.

Though this project is a case study with still much to be learned, for Firth, the study offers the opportunity to show producers that, with the right conditions and management practices, agronomic profit and environmental stewardship don't have to be mutually exclusive.

Firth is continuing her research at the intersection of agriculture and conservation as a doctoral student in the College of Forest Resources, expanding her skill set to investigate the effects of cover crops on soil health and water quality in the Mississippi Delta.