MSU deer study finds some are travelers, others homebodies By: Grace Jones 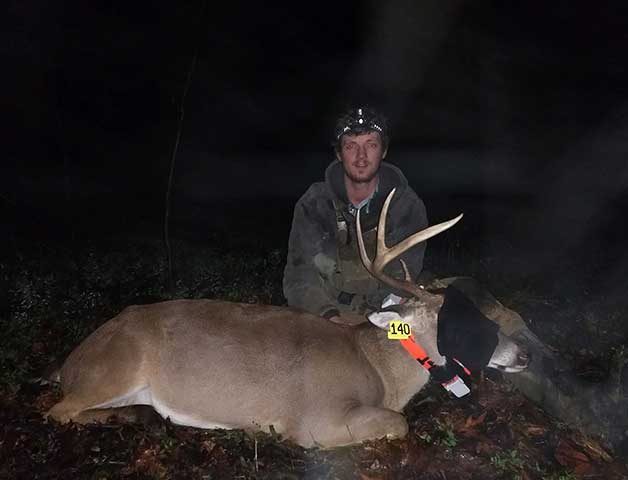 As Mississippi hunters wonder where all the bucks have gone, Mississippi State University Deer Lab scientists are looking for answers.

White-tailed deer hunting is big business in the Magnolia State, annually contributing almost $1 billion to the Mississippi economy. This time-honored tradition is why hunters and researchers keep a watchful eye out for the elusive, antlered mammal. In recent years, a noticeable number of bucks have seemed to disappear from their preferred home, only to return after hunting season ended.

This wandering behavior raised questions amongst hunters, researchers in the MSU Deer Lab and biologists in the Mississippi Department of Wildlife, Fisheries and Parks. Steve Demarais, a renowned expert in deer ecology and Taylor Chair in Applied Big Game Research and Instruction in the MSU Forest and Wildlife Research Center, took up the question to understand more about the recent movement of bucks along the Big Black River in Madison and Yazoo counties.

Demarais and a team of graduate students in MSU's College of Forest Resources sought to understand the mobile and sedentary habits among different bucks. Initially capturing 92 bucks and fitting them with tracking collars, the researchers received significant movement data from 45 deer that moved along the Big Black River.

"We documented major movement in the deer, which led to intriguing patterns in the deer we collared," Demarais said. "When we analyzed the annual home range, we noticed two patterns of movements, one being a sedentary personality and one being a mobile personality."

Past research on adult male white-tailed deer in the South suggests that most occupy a single home range, generally about 1,000 acres. This seems reasonable as mild winters in the South do not force deer to relocate, as they do in northern ranges. Yet, Demarais and his team's research indicated up to 30 percent of the bucks like to travel and have at least two home ranges.

The sedentary deer primarily live in one home range, with some short excursions outside of their preferred location. The mobile deer move between two or more distinct home ranges over time. The team sought to quantify the percentage of deer that are "homebodies" or "travelers."

Luke Resop, a master's student in MSU's Department of Wildlife, Fisheries and Aquaculture, explained that his research focuses on analyzing data collected from the GPS-equipped collars to objectively differentiate a mobile personality from a sedentary deer.

"The point of conducting scientific research, like this, is to better understand the behavior of white-tailed deer," Resop said. "Compared to past research and the differences our team found, we can see that deer have personalities and are unique in how they act, live and survive."

Through his analysis, Resop has found that while bucks neatly fall into one of the two personality categories, there's still a lot of variation. For example, one sedentary buck had an annual home range of 116 acres while another was pushing 1,300 acres. Conversely, some seasonal home ranges for mobile bucks are only separated by a half mile, while 18 miles separate the seasonal home ranges of the most extreme mobile-personality buck.

Despite the lack of ecological pressure that would require deer to relocate, we have found that 30 percent of the adult bucks we studied have multiple home ranges," Resop said. "These white-tailed deer are exhibiting migratory behavior, which historically was thought to be isolated to deer in the North. Other studies on white-tailed deer have not documented movement like this, so now we are trying to figure out what is different about these deer in the South."

As a result of the research funded by Mississippi Department of Wildlife, Fisheries and Parks, Demarais and Resop have answered some hunters' questions about disappearing bucks and are expanding the current knowledge on white-tailed deer personalities. The team has just begun another project, in the South Delta, similar to the research conducted on the Big Black River, and they are already noticing that mobile personalities are not restricted to bucks on the Big Black River. One buck displayed a highly mobile personality when he swam the Mississippi River, spent spring and early summer in Louisiana, and then returned to the South Delta in August. It appears these movements may be more common than historically thought.

As one of the premier deer research units in the U.S., the MSU Deer Lab includes scientists and graduate students in MSU's College of Forest Resources, Forest and Wildlife Research Center and Extension Service. These scientists address management issues of regional and national importance with the goal of better understanding deer ecology to inform management decisions.

Learn more about the MSU Deer Lab and listen to Deer University podcasts at www.msudeer.msstate.edu. For more on the College of Forest Resources, visit www.cfr.msstate.edu; Forest and Wildlife Research Center, www.fwrc.msstate.edu.

Photo Caption: Luke Resop, a master's student in Mississippi State's Department of Wildlife, Fisheries and Aquaculture, tranquilized and hooded this white-tailed deer, so he could put a GPS radio collar on it. This deer is an example of one with a mobile personality. After his capture in Mississippi in December 2020, he traveled 18 miles to Louisiana, crossing the Mississippi River. He came back to Mississippi a few weeks ago.