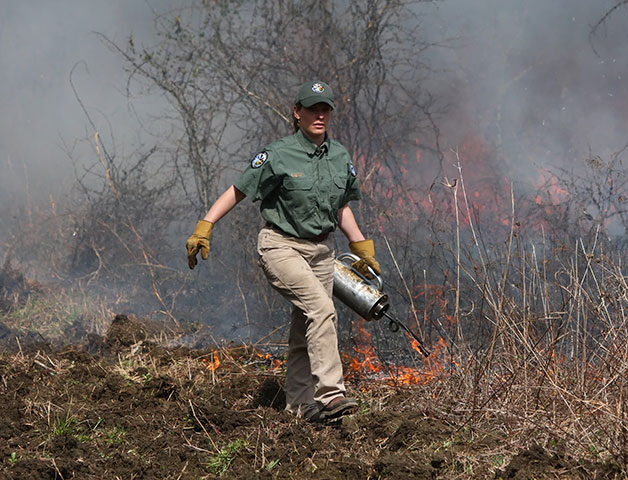 While Amy Blaylock is the first woman to serve as the Mississippi Wildlife Bureau director for the Mississippi Department of Wildlife, Fisheries and Parks (MDWFP), it's a role familiar to someone who practically grew up in the agency.

While a family legacy might have made a wildlife career seem second nature for Blaylock, she is redefining tradition and blazing her own trail.

"I don't think it's been a challenge being a woman in this position for the first time. It's definitely been more traditionally thought of as a man's world that I work in but it's a lot of fun. Everyone has been great and easy to work with," Blaylock said.

While the team may be easy to work with, the work itself can be daunting, including a challenge never before experienced by any of her predecessors, when chronic wasting disease, or CWD, was first found in the state in 2018.

"CWD management and surveillance has been a huge task to undertake, beginning in my first year in this position," Blaylock said. "We identified our first positive case in February 2018 and immediately began sampling and mobilizing a program for hunters to submit samples from harvested deer."

In addition to the fairly new CWD program, Blaylock oversees the Bureau's many other programs focused on species including deer, black bear, wild hog, alligator, turkey, waterfowl, and more.

"I'm the wildlife bureau director for the agency which oversees the wildlife management areas (WMAs), our private lands programs, and our species programs. I supervise all of our species coordinators, WMA coordinators, and biologists. I help support on-the-ground management of our wildlife management areas as well as making recommendations for regulations. For species programs, we make recommendations to the Commission on Wildlife, Fisheries, and Parks for season and bag limits. We also conduct research in conjunction with MSU."

White-tailed deer has always been Blaylock's passion in hunting and research.

"Deer are my favorite game species to hunt. That's always been what I've been around," Blaylock said. "For my master's degree working with white-tailed deer, I had the opportunity to work with MDWFP and saw my project from beginning to end. That on-the-ground hands-on experience plus the coursework really prepared me for a career with the agency."

While Blaylock studied the regional effects on white-tailed deer fawn size under the direction of Dr. Steve Demarais in the MSU Deer Lab for her master's, her undergraduate degree was in forestry.

When she finished MSU, she joined MDWFP first as a wildlife biologist working mostly with private landowners on deer management. That role expanded into serving as the WMA biologist for 11 wildlife management areas across the state.

"I loved working for the WMA program. That was one of my favorite positions I have had since my career began. It gave me a chance to be on the ground managing for wildlife instead of recommending management strategies to landowners. During that time, I was also our wildlife restoration coordinator, which involves writing the grants that funds the work our agency does. That position broadened my view on how the Wildlife Bureau operates as far as funding," she said.

Blaylock said she doesn't have as much time to hunt as she used to but that she and her husband have passed along the tradition to their two kids.

"I grew up with my dad taking me deer, dove, and squirrel hunting. Now, my daughter and son enjoy hunting, each having harvested their own deer," Blaylock said.

Whether her time is spent outdoors with her kids or in the forest directing Mississippi's wildlife programs, it's clear that Blaylock's passion for wildlife will extend to the next generation of women motivated to make a difference and manage all of the natural resources the Magnolia State has to offer.