Inspiring Conservation from IG to IRL By: Reagan Poston 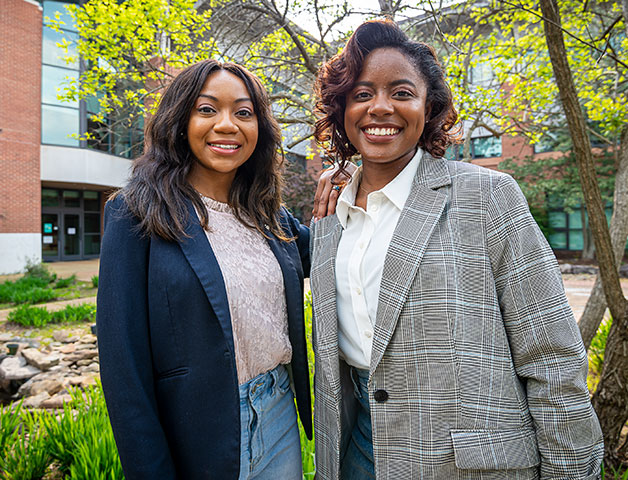 Alexander and Brister, two Black women who grew up in urban Jackson and rural Raymond, Mississippi, respectively, share strikingly similar stories as to how they became involved in wildlife and conservation.

"We both grew up outside," Brister said. "We grew up watching Steve Irwin and digging in the dirt and pretending we were from those Dawn commercials washing oil off baby ducks. As much as we loved it, it wasn't something we knew we could make a career out of as Black women until we enrolled in the College of Forest Resources."

Brister graduated in May of 2019 with dual degrees in wildlife, fisheries, and aquaculture and environmental economics and management, which is in the agricultural economics department in the College of Agriculture and Life Sciences. Alexander graduated in 2020 with a wildlife, fisheries, and aquaculture degree. Both remain at the university—Alexander as the public relations and programming coordinator in the Department of African American Studies in the College of Arts and Sciences and Brister as a wildlife, fisheries and aquaculture graduate student studying the use of precision agriculture technology for conservation and economic opportunities across the Black Belt Prairie and Mississippi Delta. It was upon taking these next steps in their futures that the pair decided their collaboration in conservation wasn't finished.

For Brister, the Instagram page is more than just a collection of photos and interesting taglines.

"Culture and Conservation is a brand focused on wildlife, conservation, and environmental education, but it's also a place that deliberately invites people of color and women into a space traditionally dominated by white men. Of course, it's open for everyone, but it's a place where we can highlight the accomplishments and perspectives of minorities in the field and where we can show other little Black girls pretending to be Steve Irwin that conservation involves them, too," Brister said.

Though Brister and Alexander are both seasoned veterans in the world of conservation, they assure that their aim is meet people where they are, citing pollinators as one of the most common ways they do that.

"We'll have the pollinators-are-necessary-for-life talk with someone, and the next time we see them, they'll tell us how they saw a bee and didn't swat it. It seems like a small thing to not swat a bee, but you know what? We'll take it. Everyone has to start somewhere in their conservation journey," Alexander said.

Though Brister and Alexander started the account to generate interest for a podcast they hope to launch soon, the social media presence they've established along the way, with more than 650 followers and counting, has allowed them to engage their audience digitally with nature and highlight how conservation concerns and welcomes everyone.

"There's not a piece of our lives that isn't affected by nature," Alexander said. "It doesn't matter who you are, and this is something that is often resonant for those of us who live in Mississippi. There's so much history tied up with it. My great-grandparents were sharecroppers, which isn't at all uncommon for Black people in the South, and it's not something we can ignore when thinking about the roots of our cultural relationship to nature. It might not be a pleasant truth, but the things I learned about the environment as a child, I learned from my mother, who learned it from hers, who learned it from my great-grandmother. Reconnecting to the environment gives everyone a chance to reclaim and celebrate intergenerational tradition and knowledge, so that both the environment and the culture of conservation can endure for generations to come."

Editors Note: Alexander is now an Admissions Counselor in the MSU Office of Admissions & Scholarships. Brister successfully graduated with her master's and is now the Federal Relations Manager at the National Fish and Wildlife Foundation.