Washed in Wood By: Meg Henderson 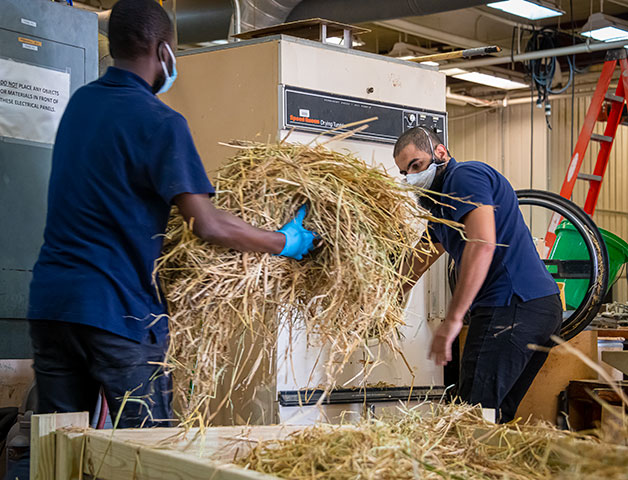 Safe drinking water is something often taken for granted. Few are aware of the chemical processes that make water safe to use and consume at the turn of the tap.

Historically, water treatment plants have relied on petrochemicals to filter out contaminants, such as toxic metals and dyes, that are present in local water sources. But an unwanted result of this capability is that these treatments create their own waste, since they are made from nonrenewable resources. A research team at Mississippi State is examining natural, renewable resources that purify water just as effectively as their man-made counterparts.

Hassan and his team developed the chemical process of converting cellulose and chitin, two natural and renewable materials, into gel-based adsorbents designed to remove toxic substances from water. They chose these materials because of their worldwide abundance. In this study, the adsorbents were tested for their effectiveness at removing the common industrial pollutants arsenic, a heavy metal, and Methylene blue, an organic contaminant, from water.

"Cellulose exists in every tree, and trees are about 45 percent cellulose," Hassan said. "And chitin comes from the exoskeleton of shrimp and other anthropods. These are natural compounds."

Toxic metals, such as lead, mercury, and arsenic, end up in local water sources as industrial pollution runs of into lakes, rivers, and reservoirs. According to Hassan, these toxins are a threat to human health and aquatic life worldwide, mostly in developing countries, but also in the United States.

"Most hydrogels are made of synthetic polymers, which come from petrochemicals and are not renewable," Hassan said. "This is problematic. It is better for nature, and for us, if we can replace the synthetic polymers with natural polymers."

At present, most water treatment facilities around the world rely on activated carbon, to filter toxins from drinking water. However, Hassan is beginning to see a shift toward adopting hydrogel and aerogel-based filtering methods—evidence of a movement toward making the water treatment industry more sustainable.

"There is growing interest, and I see more companies starting to produce hydrogel and aerogel-based solutions for water treatment," Hassan said. "It's just not on a large scale yet because the process is still in its beginning stages. We are contacting companies to implement our technology on a larger scale."

Hassan has some plans for further research on this front.

"We were focused on one technique when we conducted this study, but now we're considering process improvements for a sustainable solution," he said.

Zhang added that the team is exploring other purposes for these adsorbent materials.

"This aerogel adsorbent could also be used as an air filter or mask to remove dust, bacteria, and virus from the air," he said. "Our future research will focus on fabricating aerogel-based green masks and testing their protective performance against viruses."

This research is funded by the USDA Forest Products Laboratory.