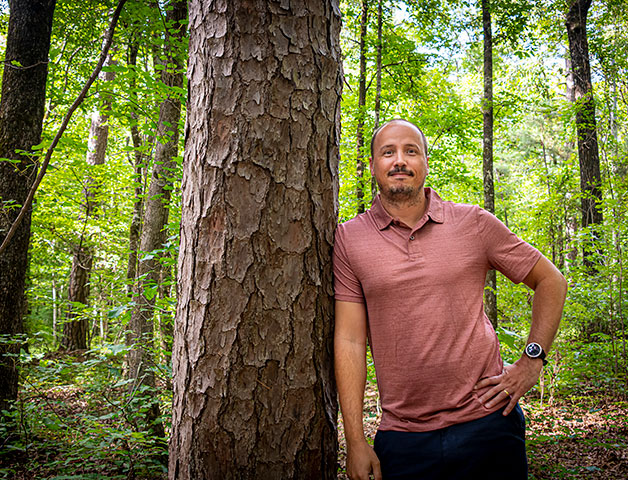 Nearly two-thirds of global greenhouse gas emissions are from carbon dioxide according to the United States Environmental Protection Agency (EPA). In the U.S., that number jumps to 80 percent. Trees store or sequester carbon, which reduces the amount that is released in the atmosphere. According to the U.S. Forest Service, America's forests sequester 866 million tons of carbon a year, which is roughly 16% of the U.S. annual emissions. As one of the most heavily forested nations, with nearly one-third of the land covered in trees, the U.S. is uniquely positioned to reduce carbon on a large scale.

Researchers in MSU's Forest and Wildlife Research Center are working to quantify carbon sequestration by forests to help the 11 million private forest landowners make the best decisions to promote sustainability from both an economic and environmental standpoint.

Dr. Bruno Silva, assistant professor of forest management and economics at MSU, and his team are building a timber supply model to help landowners better understand how they can market their forest while maximizing profits. Dr. Silva said he and his team are working with multiple companies such as NCX, a company that connects landowners with corporations interested in the carbon sequestration of a landowner's trees.

"NCX comes to landowners and gives them a payment to postpone the harvest of their trees," Dr. Silva said. "Postponing one year allows the timber to continue growing, storing additional carbon. You then are making money for that stored carbon."

The team is helping landowners better understand if postponing harvest is the right decision for them. Dr. Silva said part of the goal is to determine how these decisions will affect the timber market.

"We are investigating the impact of the carbon market merging with the timber market," Dr. Silva said. "The decision starts with the landowners wanting to know if they should cut now or wait, and our tool will allow a landowner to see market trends and make the most profitable decision. Our goal is to then answer how their decision will affect the timber market."

Dr. Silva notes that the answer will vary for small- and large-scale producers. Landowners must weigh the costs and benefits of whether signing with a carbon program is the best option for them.

"A small landowner doesn't have the same scale as a large one, so it will depend on the forest. Carbon is a good source of income for landowners, since timber markets are more restricted in comparison to large-scale landowners," Dr. Silva said. "Landowners are allowed to make profit, and contribute to further reducing carbon dioxide. But there's a cost to postpone one year, and that's considered a risk in the model."

Co-principal investigator Dr. Shaun Tanger, assistant forestry professor and extension specialist stationed at the Coastal Research and Extension Center, added that the team is working to help determine which landowners would benefit from these programs.

"There are major things a landowner takes into consideration when deciding whether or not to postpone. That's what we're digging into now," Tanger said. "We want to map everything out, so we can see who should and shouldn't be doing this, under what circumstances, and what price tag to put on their trees."

Landowners are offered a one-year agreement from NCX to postpone their tree harvest. Tanger said NCX essentially acts as a broker for companies wanting to reduce the carbon in the atmosphere. Landowners are then asked to put a price on their units, they are matched with consumer companies, and an auction is then held where a market price is determined. After the one year is up, landowners are able to harvest like they planned the previous year or re-enroll for another year.

"Natural methods for carbon sequestration are the cheapest, most effective way of keeping carbon out of the atmosphere," Tanger said. "Extending tree rotations has a social benefit of holding that carbon an additional year. There are other ecosystems that sequester carbon, but timberlands offer the most bang for the buck."

The research is something Tanger believes landowners will be able to easily implement, noting the model offers a simple way for landowners to make the best decision.

"Landowners will be able to understand the model because it's very straightforward," he said. "Landowners can wrap their head around the formulas we are developing and then they're able to figure out what their reservation price should look like. We are giving them something simple to use that improves the success of these programs and are excited to be working on this."

This research is funded by International Paper.