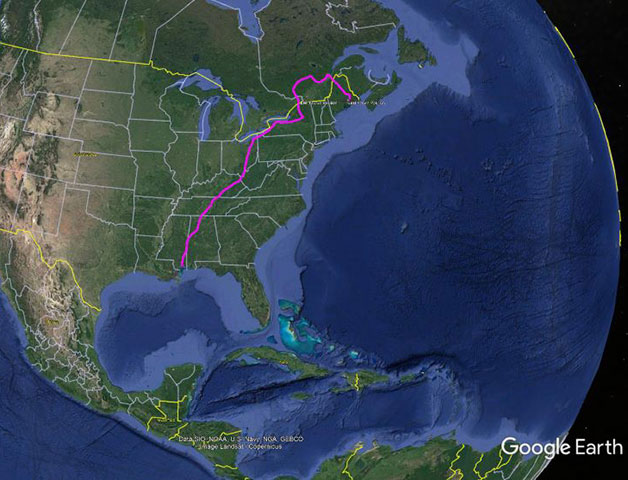 For the last three years, Mississippi Power, Mississippi State University and the U.S. Fish and Wildlife Service have partnered on a banding project to help track eaglets that hatch at the Mississippi Sandhill Crane Refuge in Gautier.

Back in early March, the project entered a new phase when a transmitter with GPS tracking was placed on an eagle. This allowed researchers to track the birds wherever they fly, teaching invaluable lessons on their migratory patterns.

After a few weeks of getting acquainted with the refuge and the surrounding the area, the tagged eagle took flight to spend the summer in the north.

"He was moving about 280 kilometers a day, almost due north, and made it to the Great Lakes region in late May," said Dr. Scott Rush with Mississippi State University's Department of Wildlife, Fisheries & Aquaculture. "From there, he moved across the border into Ontario and then along the St. Lawrence River in Quebec."

Rush said young bald eagles are known to travel north away from their nest sites and the information gained from this initial flight will help researchers for years to come.

"We don't know if the bird we tagged is traveling alone, but its movement path seems to suggest it knows where it's going," added Rush. "Perhaps this trajectory is pre-programmed in its head? Perhaps it's traveling with other birds who've made this trip before? It'll be interesting if in future years we see similar departure behavior among other hatch-year eagles from our coastal area."

In Rush's last update, the eagle had been observed in eastern Maine, between Bangor and Acadia National Park, for several weeks.

"Results like we're receiving from this transmitter are exactly what we hoped to see from this partnership," said Senior Environmental Specialist Patrick Chubb. "These transmitters will last for several years, and we'll really get to learn about how these eagles interact with the environment here in South Mississippi and beyond."

This story is courtesy of Mississippi Power.