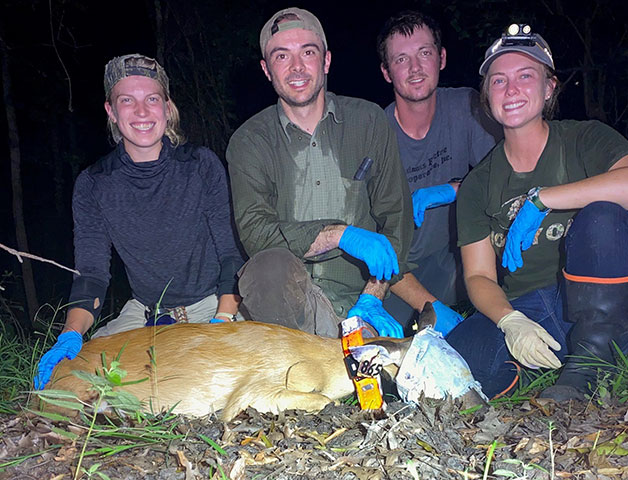 As the State Land Mammal of Mississippi, white-tailed deer is the South's most significant wildlife species. The important economic and cultural resource contributes to Mississippi's $1.14 billion-dollar hunting industry, with an estimated 280,000 deer harvested each year. FWRC researchers seek to determine how weather and disease impact deer populations so the Mississippi Department of Wildlife, Fisheries, and Parks, or MDWFP, can make informed management decisions to protect them for years to come.

Dr. Dana Morin, assistant professor in the Department of Wildlife, Fisheries and Aquaculture and population ecologist, is studying how the historic backwater flooding of 2019 affected the population. She's also studying how chronic wasting disease, or CWD, impacts it.

While the South Delta experienced historical long-term flooding in 2019, Benton is considered the state's biggest CWD hot spot while Chickasaw, with no flooding or CWD cases, will serve as the project's control. Density will be estimated following harvest and fawn recruitment in Benton and Chickasaw counties while changes in density from year to year will be estimated in the South Delta. Researchers will build heat maps of population density across each area.

Considered the gold standard for estimating population density, "Spatial Capture-Recapture" methods combine spatially referenced detections of individuals to estimate how many deer are in each area. To achieve this, the team is collecting fecal pellets along transects with precise location data where each pellet pile is found and identifying individual deer in each area from the DNA of the pellets.

"We will identify individual deer and then estimate the population density based on the repeated detection of those individuals, which will allow us to evaluate the impact of factors including CWD and flooding while also validating different methods for estimating deer density with passive, or non-baited camera surveys," Morin said.

She hopes the team can also identify populations more or less susceptible to CWD. The detection of a Prnp gene in an individual's DNA can indicate if an animal can produce prions, the misfolded protein that causes CWD.

CWD, specifically, has impacted how deer population dynamics are studied in the state.

"When CWD is detected in an area, an immediate mitigation strategy is to suspend all supplemental feed," Morin said. "Unfortunately, supplemental feed is how we entice deer to participate in camera surveys that estimate population size."

To that extent, Morin is testing six types of non-baited passive camera surveys.

"While camera surveys have become less expensive and easy to use, the methods of estimating population density with them have not caught up to the technology's availability and use. This is a good opportunity to evaluate methods and make sure we use these tools effectively," Morin said.

Dr. Steve Demarais is assisting with the third aspect of the two-year study by collaring a total of 20 white-tailed deer with GPS trackers, so Morin can include movement rates into her population models. Five bucks and five does will be collared in both the South Delta region and Benton County. The Taylor Chair in Applied Big Game Research and Instruction said the deer they've already collared have provided some interesting insight.

"From a previous study, we learned that some bucks have a sedentary home range while others are mobile, opting for more than one home range and traveling miles between the two," Demarais said. "One of our collared bucks was mobile and traveled 18 miles between two home ranges, including swimming the Mississippi River twice."

He said Morin's work will help inform land managers as they navigate the challenges long-term flooding and CWD can present in deer management.

"Knowing the deer population size and monitoring it over time allows us to determine if harvest or other factors like long-term flooding and CWD impact populations, which will inform management decisions for each specific population," Demarais said. "This study will give MDWFP the vital information they need while also helping us determine the best ways to use non-baited camera surveys to effectively measure population dynamics."

This research is funded by the Mississippi Department of Wildlife, Fisheries, and Parks and the MSU Forest and Wildlife Research Center.